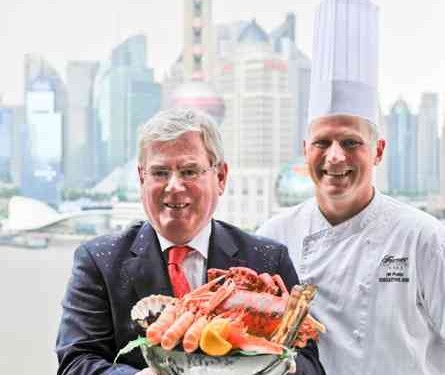 Ireland has secured full market access to China for salmon exports during a four-day political and trade mission to Beijing and Shanghai. The announcement, by the Tánaiste and Minister for Foreign Affairs and Trade, Eamon Gilmore, TD, has  followed four years of intensive negotiations with the Chinese authorities by the Sea Fisheries Protection Authority (SFPA) in conjunction with the Irish Embassy in Beijing.

Speaking in Shanghai, where the announcement was made earlier today, Deputy Gilmore welcomed the Chinese decision and said the deal will give a further boost to our growing seafood exports.

“The conclusion of these negotiations by the SFPA, with the assistance of our Embassy in Beijing, represents an important step in the ongoing opening of the Chinese market for Irish seafood. Last year was our most successful ever for food and drink exports, which is proof of the quality of product Ireland has to offer. What’s important now is to build on this deal, to further expand the range of Irish seafood available in China.”

Irish seafood exports to China have recorded a 75 per cent increase in recent years, growing from €5.7m in 2010 to €10m in 2012. Today’s announcement represents a sizeable opportunity for Irish salmon exporters with demand for high-end seafood in China growing substantially each year.

With the support of the Irish Embassy in Beijing, the SFPA began discussions in 2009 with the relevant Chinese Authorities. A visit to Ireland by the Chinese to agree on health certificates followed.

In addition to allowing immediate access for Irish exporters to sell salmon into China, today’s announcement is a measure of confidence in Ireland’s seafood quality controls.

The Tánaiste added: “International trade in food involves trust in food control systems, something which the Irish Authorities take very seriously. The SFPA work hard to maximise the benefit of the high standards which Irish seafood companies adhere to. We can see clearly this is paying dividends, with increased exports and jobs in Ireland”.

SFPA’s relationship with the Chinese authorities is crucial for continued market access for Irish seafood to China, the Tanaiste added.

Pictured: Tánaiste and Minister for Foreign Affairs and Trade, Eamon Gilmore, TD, with a sample of Irish seafood now available in China. The Tánaiste announced full market access for Irish salmon during his visit to Shanghai.

This story was updated with a picture at 4.34pm