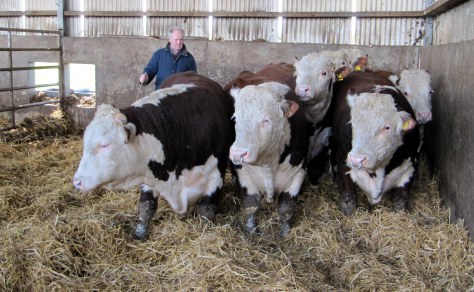 A consignment of Irish Hereford bulls and heifers are en route to Russia after leaving Irish shores last week.

This is the first shipment of Irish cattle to leave for Russia since 2013, when some 239 head were exported.

Gathered by exporter Hubert Maxwell, the load consisting of eight pedigree bulls and 30 in-calf heifers will make the trip across Europe before arriving at their destination just west of Moscow.

The Irish Hereford Breed Society worked closely with the exporter to assemble the stock from pedigree herds across the country.

And, prior to leaving, the group of 38 animals spent 30 days in quarantine before travelling to Rosslare, Co. Wexford – from where they began their week-long journey.

The Russian buyers had previously visited Irish farms in January and were extremely satisfied with the quality and standards of the livestock on show.

Svetlana Koss co-ordinated the project and said she was extremely pleased with both the quality of the cattle and how the current project has worked out.

Advertisement
In addition, 100 in-calf Irish Hereford heifers are currently in quarantine and are expected to leave for Russia once quarantine requirements have been fulfilled.

Irish Hereford Society Chairman Willie Branagan said he was very pleased with the progress to date and is confident that further similar orders, including maiden heifers, will be made later this spring.

The Hereford cattle exported will allow the expansion and rebuilding of the beef cattle population in Russia, which has huge possibilities for development into the future, he said.

More news on the export front

Last week, Agriland exclusively revealed that a consignment of approximately 600 Irish bulls will be exported to Algeria in the near future.

The bulls have been gathered by a Leinster-based exporter and will be the first batch of Irish cattle to be exported to Algeria since health certificates were agreed last year.

The bulls will be transported to France, from where they will make the short journey across to Algeria.

It is expected that a further 600 will be exported in the near future – bringing the total under the current deal to 1,200 head.