Irish heifer prices increase, as falls reported in the North and Britain

An increase of 6.8c/kg was seen in Irish R3 grade heifer prices at the end of the first week in January, figures from the Livestock and Meat Commission (LMC) show.

Irish R3 heifer prices reached 382.2c/kg in the week ending January 8, compared to 375.3c/kg in the corresponding week in December,

This increase also meant that Irish heifer prices remained above the EU average for a second consecutive week.

In a week where the euro was the equivalent of 85.1p, the price difference between north and south of the border narrowed.

In the week ending January 8, heifer prices in Northern Ireland had a 31.5c/kg lead on those being offered in the Republic of Ireland.

On a 280kg R3 grade heifer carcass this represents a difference of €88.20 in favour of farmers in the North.

But the north/south price divide has narrowed by 10.9c/kg in the space of four weeks, LMC figures show.

At the end of the first week in January, heifer prices in Northern Ireland was the equivalent of 413.7c/kg, a decrease of 4.1c/kg compared to prices from four weeks ago.

Meanwhile, prices in Britain also witnessed a decrease, of 3c/kg, at the end of the first week in 2017.

The R3 heifer price in Britain was 423.9c/kg, leaving it 41.7c/kg and 10.2c/kg above prices in the Republic of Ireland and Northern Ireland respectively.

This means that British farmers will receive €116.76 more for a 280kg R3 heifer carcass compared to a farmer in the Republic of Ireland, while farmers in the North will receive €28.56 less for the same carcass. 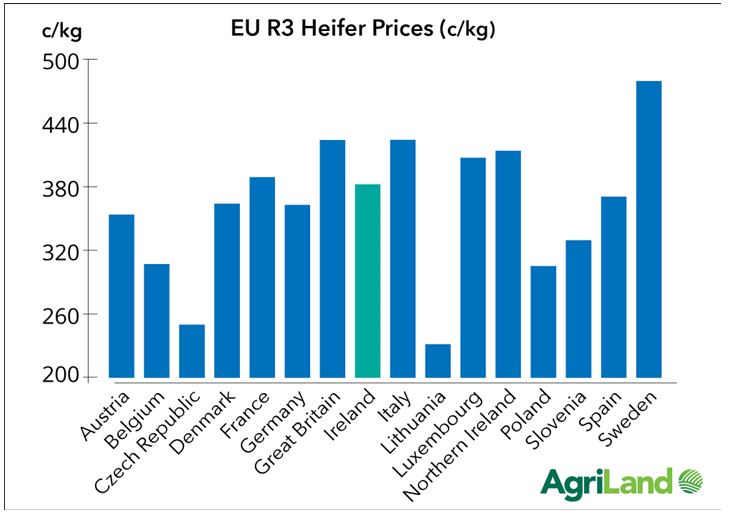 Figures sourced from the LMC.

At the end of the first week in 2017, British heifer prices fell to third place in the EU league table, figures from the LMC show.

Sweden continues to lead the table, with a price of 479.4c/kg, while Italy takes second position thanks to a price increase of 10.4c/kg in the space of four weeks.