Irish beef exports to the US running 13% behind 2016 levels

Irish beef exports to the US this year are running 13% behind 2016 levels, the Minister for Agriculture, Food and the Marine, Michael Creed, revealed.

Quoting the latest figures from the US Department of Agriculture (USDA), Minister Creed said that exports of beef from Ireland to the US amounted to 1,430t up to and including the week ending August 26.

Minister Creed made the comments in response to a recent parliamentary question from Fianna Fail’s Agriculture Spokesperson, Charlie McConalogue.

“Ireland was the first EU member state to be granted beef market access to the USA in 2015. A total of 10 Irish plants have been approved for the export of raw intact beef to the US, of which two are also approved for beef intended for grinding (BIFG).

This enhances our ability to export beef to the US, where a very significant demand exists for beef that will be minced and turned into beef burgers.

“There are no manufactured beef products exported from Ireland to the US, as we do not have access for manufactured beef. All meat plants approved for the export of beef are subject to audit by the Food Safety Inspection Service (FSIS), a branch of the USDA,” Minister Creed said.

Irish agri-food exports to the US

According to statistics from the Central Statistics Office (CSO), Ireland’s overall agri-food exports to the US in the first half of this year amounted to approximately €520 million. This was a significant increase from the €430 million found during the same period in 2016, Minister Creed added.

Beverages account for almost half the agri-food exports to the USA, the minister explained.

There were no exports of lamb from Ireland to the US as we do not have sheepmeat access yet.

“One of the main factors affecting trade is currency fluctuations and 2017 has seen an unfavourable movement in the exchange rate between the US dollar and the euro,” Minister Creed said.

On the subject of Irish sheepmeat access to the US, Minister Creed said that sheepmeat exports from the EU to the US are banned due to the presence of TSE (Transmissible spongiform encephalopathies) in certain EU member states.

“Access to the US will depend on the USA lifting its TSE ban on EU sheepmeat.

“The final TSE rule has not been published as yet, but my department and I have raised this issue with the USDA on a number of occasions – including as part of the trade mission in June this year.

Sheepmeat access to the US is a high priority for my department and the sheepmeat industry.

“An encouraging development is that the Food Safety Inspection Service / USDA inspection visit to Ireland in September 2017 will include visits to Irish sheepmeat plants. However, timelines for access are not possible to predict,” the minister said.

With regards to pork exports, Ireland has enjoyed uninterrupted access to the US market for raw pork since the end of the foot-and-mouth disease outbreak in 2001.

“A total of three plants are approved for the export of raw pork to the US. Previously, Ireland also had access for treated or processed pork products.

“However, this access lapsed earlier this year as no exports had taken place within the preceding three year period,” Minister Creed concluded. 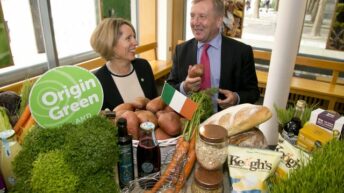