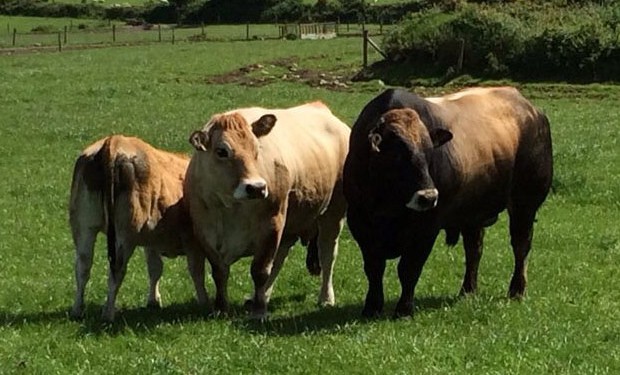 The Irish Aubrac Society is holding its AGM this Sunday, May 29 at 12pm at Ballykisteen Hotel and Golf Resort, Limerick Junction, Co. Tipperary.

In conjunction with the AGM a farm walk will be held on the farm of James Ryan, Glengar, Doon, Co. Limerick. The farm comprises of both pedigree and commercial crossbred Aubrac stock.

A bus will be leaving the hotel at 12.30 which will transport us to James’s farm.

According to the society, Aubrac cattle are well-muscled medium sized animals, which feeds well on low-cost roughage: grass and hay, thus reducing the production cost of the finished animal.

In France, they live at an average altitude of 3,000 feet and can stand harsh climates. In summer, they forage on poor vast pastures, and spend the winter tied up in sheds on concrete.

Aubracs also have excellent pelvic conformation is one of the main criteria in selection of bulls and cows.

The Aubrac bulls are used successfully on dairy and suckler herds for ease of calving. Calves are relatively small, weighing 35kg-40kg. They are lively and hardy at birth with high growth rates.

The first animals were brought into Skibbereen from the U.K. as embryos (1 heifer – 2 bulls) in 1992. Straws were taken from the best bull and used on dairy and suckler cows, mostly in the West Cork region. The next shipment of in-calf and maiden heifers arrived from France in County Kildare in the autumn of 1996.

With a few very interested breeders getting together, the Irish Aubrac Cattle Breed Society Limited was formed in January 1998. In 2007, it now counts over 70 members, and over 750 registered females of breeding age.

The Irish Aubrac Cattle Breed Society Limited received official approval from the Department of Agriculture in August 2005. The majority of the members are part-time farmers who have chosen this breed for its ease of management. All registered calves born in Ireland since 2000 are inspected and linear scored.