Ireland has been net importer of food since 2000, UN data reveals

Contrary to the prevailing opinion in Irish agriculture, both Ireland and the EU are net importers of food energy.

According to the Food and Agriculture Organisation (FAO) of the United Nations, data from 1960 to 2011 (the most recently available data) reveal that while Ireland was a net importer of calories until the mid-1970s, it then became a net exporter until 2000.

Since then, however, the value of this country’s food energy net imports in calories has at times exceeded the equivalent of the calorie intake of 2.5 million people.

“I was quite surprised to find that we are actually net importers of food energy in Ireland and Europe,” said Dr Colin Doyle, who compiled the data while researching for a doctorate on climate change policy. 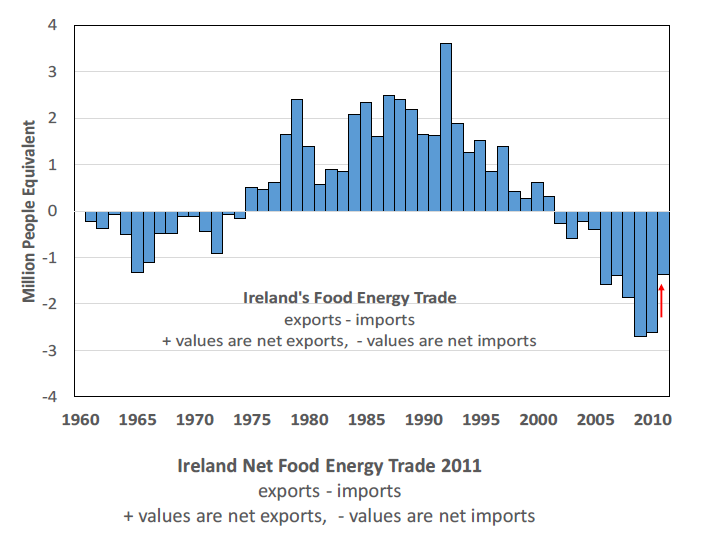 Doyle worked as an environmental consultant in Ireland from 1995 to 2011 and now works as a climate change sustainability consultant in Finland.

His doctorate, in particular, examined how climate change policy was impacted by agriculture and land use, which lead him to research food energy flows in and out of the EU.

“The key finding is that Europe is a net importer of food energy.”

Doyle said this is relevant to the Irish agricultural sector, which claims that Ireland has a duty to increase production to feed the world.

When we look at the current production model we find that we are providing meat from Ireland within the European Union, but we are not feeding the world. We are drawing on world food supplies to support our livestock production.”

While 2011 is the most recently available data from the FOA, Doyle said he is not aware of any evidence of Ireland’s or the EU’s food energy import trend changing in the interim.

Doyle says that that while significant food energy is exported from Ireland, mainly in the form of dairy and beef, such products contain less food energy than imports of cereals, sugar and vegetable oils.

He said a comparable trend has historically guided the export and import of food energy in the EU.

He said that increasing EU food output within the existing agricultural models would just lead to increased food energy imports, due to the diversion of cereals from human food supply and towards animal feed in Europe. 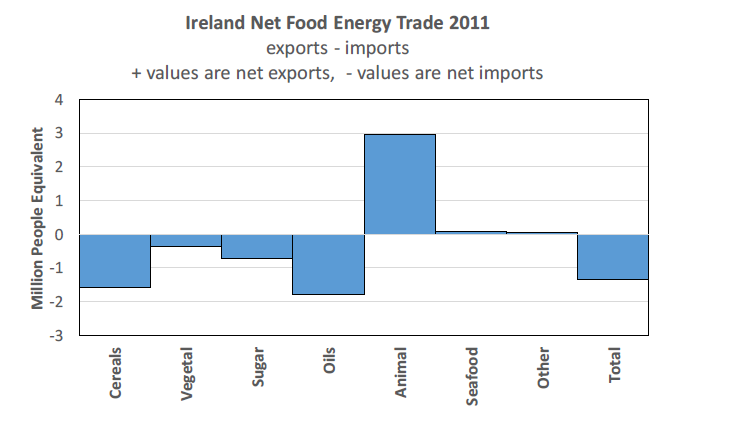 “If we scale up the existing model of food production in the EU and Ireland, it won’t actually add to world food supplies,” Doyle said.

“We will still draw from other countries, unless we change something in the structure of our agricultural systems.

“In Ireland, in particular it will be importation of cereals for livestock. Most of the calories that we export are in the form of milk products.

If we just expand our existing supply of production, we will need to import more cereal for that, which will draw food from the world instead of providing food to it. That’s the key message.” 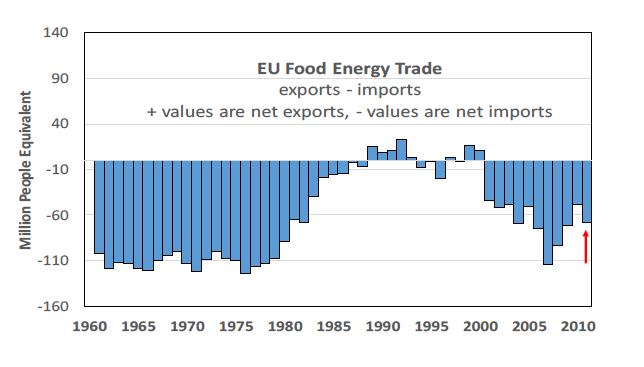 However, Doyle acknowledges that no FAO data on the value or volume of food products imported or exported to/from Ireland or the EU  were analysed during his research.

“My only analysis was in terms of [food] energy, as I was trying to tie it in with biofuels. When dealing with energy, you can do a direct conversion.”