Tillage; sucklers; forestry; green house gases (GHGs); and glyphosate were all on the agenda when AgriLand sat down with Paddy Browne, the head of the Teagasc Crops, Environment and Land Use Programme (CELUP), ahead of his retirement in two weeks time.

Browne has 40 years experience between the Carlow Committee of Agriculture, the Agricultural Training Council (ACOT) and Teagasc, which has turned up many changes and challenges.

During his time in Teagasc, Browne closed the agricultural colleges during the foot and mouth crisis; saw the revamp of Teagasc advisory with the introduction of charges; helped to develop the first discussion groups; and has seen tillage acreage, income and farmer numbers drop as cereal yields increased.

Threats to the tillage industry

The glyphosate debate and the dairy industry are the biggest threats to the tillage industry at present, according to Browne.

“The biggest threat of all is the threat to glyphosate. If glyphosate goes we’re all in big trouble. It has been revolutionary.

I was thinking back to the things that were done to try to control scutch before glyphosate came in – grubbing the headlands and picking up all of the roots with a loader.

“I disagree with MEPs coming out and saying that glyphosate is bad. It’s a very safe product as far as I’m aware. Marian Harkin [MEP] made the point that, if the product is that important, an alternative will be developed.

“The tillage sector can’t survive without a good replacement. It’s crucial for the sector. The replacements may be harsher.

The alternatives are nowhere near as safe as glyphosate. It will be an awful set back for the sector if it’s banned.

“It’s one of the things that would make you despair a little bit about the EU. Brexit is happening because the EU tends to be over the top. The EU is right on a lot of things – compared with the states – on things like growth promoters and the likes.

There is overwhelming evidence over the safety of glyphosate.

Browne sees low income and dairy expansion as other threats to the tillage industry at the moment.

“The income in the tillage sector is also a huge challenge. Prices have been low for the past few years. If they stay at that level it’s hard to see a lot of people surviving. People are losing money and eating into their Single Farm Payment.

“The dairy industry is a threat. It could probably expand without affecting tillage because of the different areas of the country. Dairy could meet its targets with a reduction in the suckler herd.”

Browne continued: “To me that’s the biggest issue at the moment. There’s no logic for the maintenance of the suckler herd and it’s so political that you can’t say that.

“The government have been afraid to say it in Food Harvest and Food Wise. It was the elephant in the room. We can achieve our dairy targets, but we need to increase forestry because of GHGs and we need to reduce sucklers because of GHGs; and because there is no money in it.

Reducing the suckler herd is mutually compatible with the increase in the dairy herd.

“The farming organisations do now realise that the future of the beef industry in this country will come from the dairy herd and not from the suckler herd. That’s catching hold in the dairy areas where the expansion is taking hold.

Our GHG targets are completely dependent on an increase in forestry and it’s not happening at the moment.

“We’re under 6,000ha/year in re-plantings and to meet our longer term targets on GHGs, as a sector, we need to be planting about 12,000ha/year. That’s at least double what we’re doing at the minute. There’s no chance of that happening with the current policies that are there and the current level of planting grants. 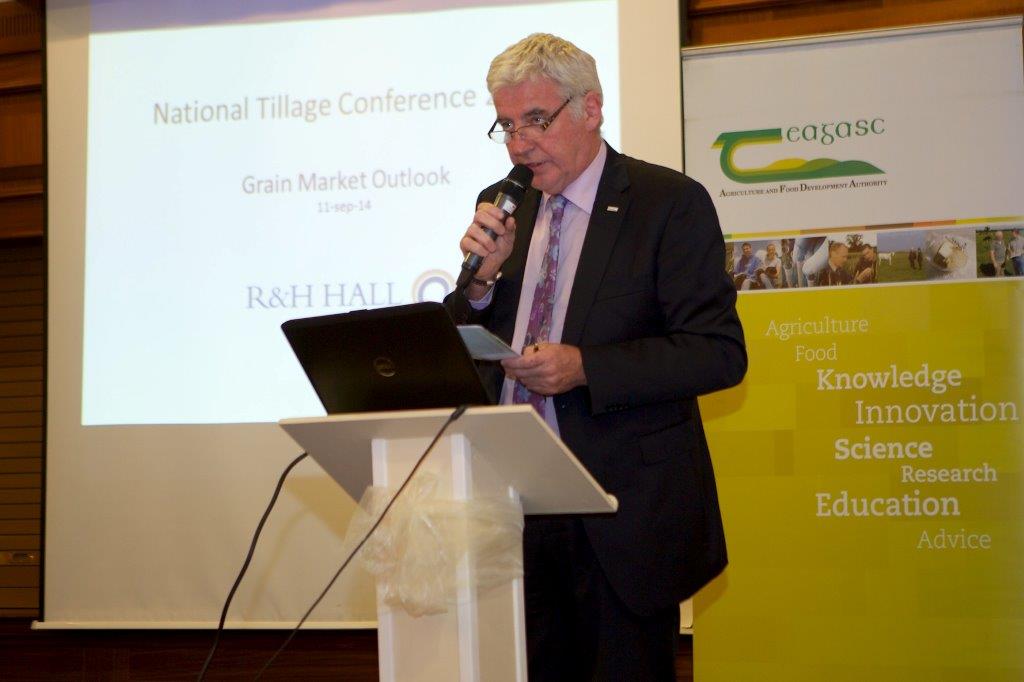 Paddy Browne speaking at the National Tillage Conference in 2014

Is the tillage sector viable?

“I wouldn’t say the same thing about the tillage industry as the suckler herd. Maybe I’m a bit bias, but people are only beginning to realise now that we do need a tillage sector in this country.

“I would hate to see any further reduction in the tillage area. Our leading tillage farmers depend on conacre or leased land.

“The incentives for leasing have been very good in the past few years, yet farmers are paying over €200/ac for land. There is no money in that,” he added.

Browne believes that the price paid for malting and particularly distilling barley is too low.

“I believe that the malting barley farmers are not getting paid enough – particularly for distilling. There’s a significant yield penalty with distilling. Certainly the bonus needs to improve; but still it’s a valuable sector.”

“There’s nothing we can do about prices. We’re world price takers. The potential to increase production in Eastern Europe, Russia and South America is like turning on a switch.

The only way that we will maintain the tillage industry is through premium products such as: GM free produce; native rations; and an increase in malting and distilling products. It won’t survive otherwise.

“The processors need to increase the price, but they’re in business to make money and they will pay as little as they can get away with.”

Browne does think that the dairy industry is beginning to realise that they need a viable tillage sector in order to sell its products.

“Germany is one of our biggest markets for Irish butter and the Germans have now said that they only want GM-free butter. That’s a big sector to the dairy industry and to farmers.

“There is scope there to produce all native rations as a marketing ploy. If we could increase beans and oilseed rape it would go a long way to producing Irish rations.

“I think the processors, like Glanbia, are beginning to see the need for native and GM-free rations. I think they want to close the loop and say that their grain intake is being fed to their dairy farms. That will build up a head of steam.

“Others will follow. Dairy farmers will always, naturally enough, go for the cheapest ration they can. They won’t pay extra for an Irish or a GM-free ration if they don’t have to; it will be driven by the market.

Market forces will require them to promote all native grain or GM-free grain.

“In time these things will give a boost to the Irish grain grower, but at the type of prices that are there at the moment it is completely unsustainable.”

What are the challenges that your successor will face in the job?

“The GHG debate is going to be a challenge. The amount of press that the citizens assembly got last week showed that. The role of Gary Lanigan and his colleagues in Johnstown Castle is going to get bigger and bigger.

“The story is similar with water quality. By and large, our work has shown that in intensive agricultural areas we can maintain the quality of water. A lot of the dis-improvement in water quality has been in high-nature areas and it wasn’t due to farming in those areas.

“The dairy industry are putting massive effort into water quality at the minute; we’re working with them by putting a water advisory service in place in every co-op. They’re doing it for commercial reasons, to market products and demonstrate sustainability.

“Environment has become a crucial part of all research work.

“The organisation is still focused on productivity and the economics of farming and increasing milk output; that’s the big aim in town, but with an increasing emphasis on protecting the environment.

Challenges and changes in Teagasc

Browne has faced challenges, both good and bad. The setting up of discussion groups is something that Browne is proud to associate himself with.

“I was a regional aid in Kildalton – an assistant to the regional manager. It was an interesting time. Michael Galvin was my boss and he was the man who developed the first joint programme with Avonmore and we also started the discussion groups with Matt Ryan; they’re two main features of the advisory set up now.

The thinking then was that the role of the advisor was not to empty the ‘big jug’ of water into the glass – it was to facilitate. People learn better from their peers than from the ‘so called expert’.

“It was a whole new concept then. It was such a different way of operating. You’re only role as an advisor was to correct people if incorrect information was being shared. Discussion groups are enshrined in national policy now through the KT groups.

He worked as an advisor for 14 years and was head of tillage advisory. One of the biggest changes that happened in Browne’s time in Teagasc was the introduction of advisory charges.

The introduction of charges and specialising was a big development. Charges came in around the early 1990s.  We were forced into doing it by the private sector and it was right. It was unfair competition.

“It worked out reasonably well. We only have about 250 advisors now – down from about 600. There are more consultants now than there are Teagasc advisors – they’re needed out there.

“The competition forced us, in Teagasc, to get out of schemes and to focus on development and technical advice and that’s largely what we’ve done. We’ve got out of schemes with the exception of the BPS. We do GLAS, but we do it through the FRS. That has been a major change over the years.

“On the research side, the Walsh Fellowship scheme and the ability to employ contract researchers were great developments.

“We only have 100 permanent researchers. The scheme allowed more research work to be done and brought more enthusiasm to research centres.”

Browne admitted that he will miss the work.

“Teagasc is a fantastic organisation to work for. I enjoyed coming into work everyday. I’ve had five very different jobs within the organisation. That made the 40 years very short. I wasn’t in the same job for 40 years so it has been great from that point of view,” he concluded.