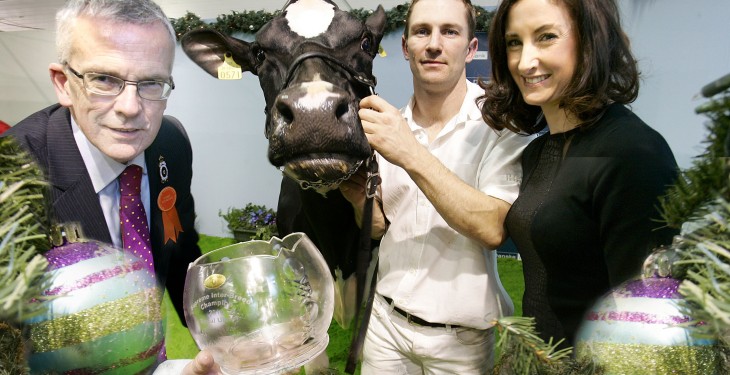 All of the main competition prizes at the recent Royal Ulster Winter Dairy Fair headed south on the back of the largest entry yet from dairy breeders in the Republic of Ireland.

And while all the plaudits, quite rightly, went to the Holstein fouth calver Desmond Dundee Embrace – this year’s Inter Breed Champion – the largest cheer of the day went up when the 10-year-old Shorthorn seventh calver Monasterosis Jennie Deans eight was selected as the Inter Breed Reserve award winner.

Judge Brian Carscadden, from Ontario in Canada, made specific mention of the latter cow in his summing up of the day’s events, referring to her as an outstanding example of the Shorthorn breed.

“The quality of the cows entered for this year’s Winter Fair was exceptional with many of a standard that would be hard matched at most international dairy events,” he said.

Embrace is owned jointly by Wexford breeder Philip Jones and Roy Cromie from Co. Donegal. The cow was exhibited under their Hallow Holsteins herd prefix.

“She calved for the fourth time back in May of this year. Embrace is a former Honourable Mention award winner at the Emerald Expo,” Philip explained.

“We will flush her over the coming weeks to produce embryos and then put her back in calf.”

Jennie Deans was exhibited by Michael and Ann Maree Manley, from Co. Offaly. She won the supreme Shorthorn Championship at the 2014 Emerald Expo. The Ayrshire Champion at this year’s Winter Fair, Marleycote Sea Lilly 14, was exhibited by the McLean and Cromie partnership from North Co. Antrim.

An excellent turnout of Jerseys gave rise to stiff competition for the breed title, which was won by the Fleming family, from Co. Down, with their senior cow Potterswalls Action Daisybelle.