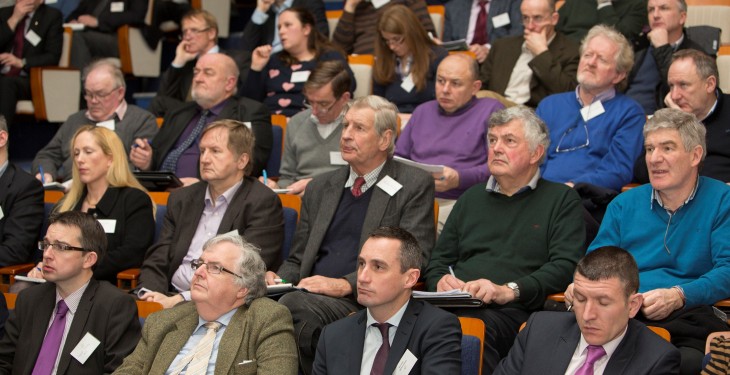 New regulation sets out three clear objectives, he noted in his presentation. Firstly, fostering the competitiveness of agriculture. Secondly ensuring the sustainable management of natural resources and climate action. And thirdly achieving balanced territorial development of rural communities. He also noted  cross cutting all those objectives will be polices in innovation, climate change and environment.

O’Brien confirmed in terms of overall financing the new programme will get €2.19bn of EU funding including seven per cent for LEADER. He cited that national funding for Ireland, which was announced by the minister on earlier this month, consists of €3.9bn for 2014-2020 with more than €4bn with LEADER.

O’Brien’s presentation went on to highlight the key measures in the plan:

Agri-environment climate measures
He outlined the new agri-environment scheme, which will be called GLAS and GLAS +. He noted its structure takes into account key challenges in this area. Core requirements for all applicants will include; application approved by planner, nutrient management plan, compulsory knowledge transfer and record keeping.

In relation to entry into the scheme, priority entry will be given to farmers who undertake specific actions if they suit the farmers holding. These actions include; habitat conservation (natura sites eg freshwater pearl mussel), conservation of bird species (eg corncrake, twite), uplands conservation (commonages only), watercourse fencing where field is in grass and watercourse buffer zones where field in tillage.

He cited if the above aren’t applicable the farmer must undertake one of a list of other actions to get priority access including; Low emission slurry spreading, minimum tillage, green cover establishment from a sown crop and wild bird/flower cover.

O’Brien noted farmers can take on general actions to maximise their payment. Planners will be required to advise farmers on most suitable actions. He noted  it is envisaged that the scheme will build up to 50,000 farmers at max €5,000.

Other elements of the scheme were also highlighted including an organic farming scheme. The department are currently examining options for increased participation and it will possible integrated with GLAS to top up OFS payments.

There will also be a targeted output-based scheme. This will possibly involve the possible expansion of Burren Scheme as well as a competitive, competitive fund for similar structures aimed at key challenges.

Areas of Natural Constraint
The measure will incorporate the schemes formerly know as Less Favourable Area (LFA)/Disadvantaged Area Scheme (DAS). O’Brien noted it is proposed to continue at current level of funding. However new biophysical criteria for designation is to be introduced by 2018.

Knowledge Transfer Measures
O’Brien cited that key elements of this measure will include a European Innovation Partnership, Knowledge Transfer Groups / EIP, CPD for advisors and a targeted Advisory Service on Animal Health and Welfare.

Collaborative and Quality Focused Measures
The new RDP will support for collaborative farming noted O’Brien. This measure will also focus on Artisan food cooperation schemes and support for quality schemes.

Targeted Support
This measure will incorporate the Beef Data and Genomics Programme which is already in place. O’Brein noted it will also address the area of support for Island farming.