Industry comes together at ‘Athletic Horse – Inside Out’ event 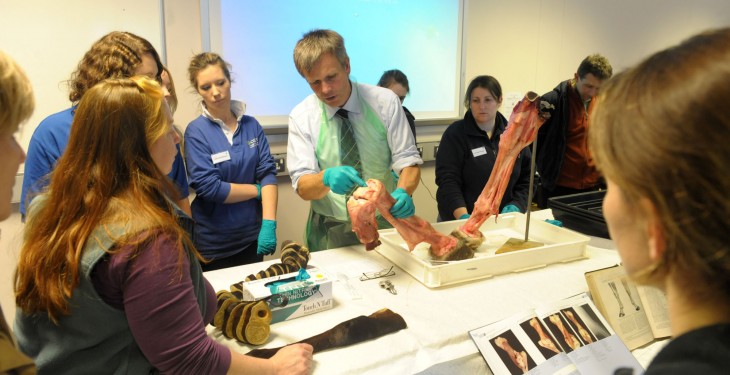 More than 100 leading industry professionals attended the ‘Athletic Horse – Inside out’ event, hosted by the College of Agriculture, Food and Rural Enterprise (CAFRE) on Tuesday 4 March at Greenmount Campus Antrim.

A wide range of aspects of the equine industry, North and South were represented, including jockeys, racehorse trainers, vets, coaches, breeders and professional and leisure riders.

Participants had the opportunity to listen to world-class speakers and examine various equine body parts including the lower limb, the hoof, heart, trachea, stomach and also to discuss the importance of stable hygiene in relation to microbiology.

Participants enjoyed a reception and networking opportunity and were divided up into five groups with each group rotated around each of the five speakers. This allowed everyone to get up close and inspect the various pieces of anatomy that the speakers were discussing.

Geoff Lane, one of Europe’s leading veterinarians on upper respiratory tract problems having carried out several hundred procedures each year as a private referral consultant, discussed how wind problems affect the athletic horse and what procedures work best for various conditions.

Geoff assisted participants to examine an equine trachea and participants were able to see and feel where problems can take place.

Martin Payne who has been a farrier for more than 24 years discussed various remedial shoeing and trimming practices for performance and soundness in the athletic horse.

Payne had a large range of shoes and hooves for participants to study and also discussed navicular disease and the developing hoof in foals.

William Sharp from Lisadell Equine Hospital along with Chris Miller from Gain Horse Feeds explained Equine Gastric Ulcer Syndrome describing how quickly gastric ulcers can develop and ways to prevent ulcers. Delegates were able to inspect an equine stomach and see exactly where ulcers can be located.

The lower leg was described by Hugh Suffern from Tullyraine Equine Clinic using a number of equine legs. Suffern assisted participants to identify various bones, tendons and ligaments in the lower leg as well as discussing common ailments which affect performance horses such as splints, strained tendons and fractures.

Environmental scientist Alan Creighton represented the Irish Equine Centre and illustrated the importance of good stable and yard hygiene and environmental pathogens and immunity in the horse.

Creighton also described the Irish Equine Centre’s role in investigating yards whose horses have been performing poorly for unexplained reasons and how mycotoxins, Aspergillus and other pathogens are commonly found to be the cause.

Those attending were hugely enthusiastic about the amount and depth of new information they had discovered and there were constant questions and lively debate throughout the day among the speakers and participants. CAFRE are now looking forward to the next Athletic Horse – Inside Out, event in the future.