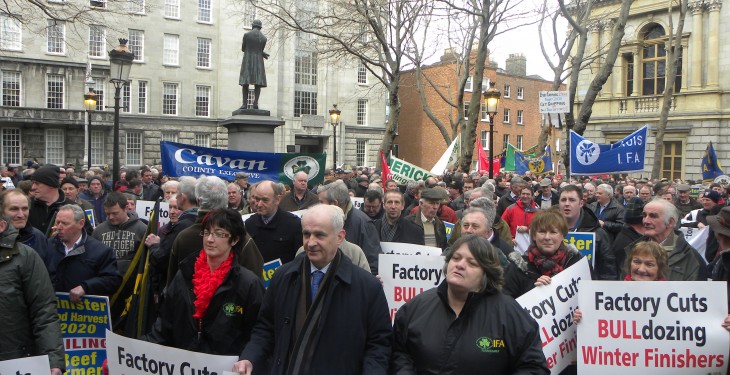 Organisation president Eddie Downey met with leading representatives of the UK’s supermarkets to find out at first hand what really is going at retail level in Britain. This get-together was held in London.

Yesterday was also marked by a delegation from the Ulster Farmers’ Union (UFU) meeting with representatives from the IFA to discuss the current crisis situation facing beef farmers in Northern Ireland and the Republic of Ireland.

Sinclair said: “This meeting was an excellent opportunity to meet with the IFA’s recently elected presidential team to discuss our common issues. At present, beef prices are a significant issue for farmers both North and South of the border. In Northern Ireland beef prices have dropped considerably in recent weeks and farmers are finding things incredibly tough.

“The UFU continues to monitor the situation and put pressure on the Northern meat plants to ensure they are paying a fair price and we have also urged them to rethink their position on introducing penalties for cattle with more than four residencies and the requirement that cattle must reside at their final residence for at least 30 days. Similar things are happening in ROI so the meeting in Dublin provided us with a chance to discuss these issues in more detail and find ways to work with our ROI counterparts to ensure they are addressed.”