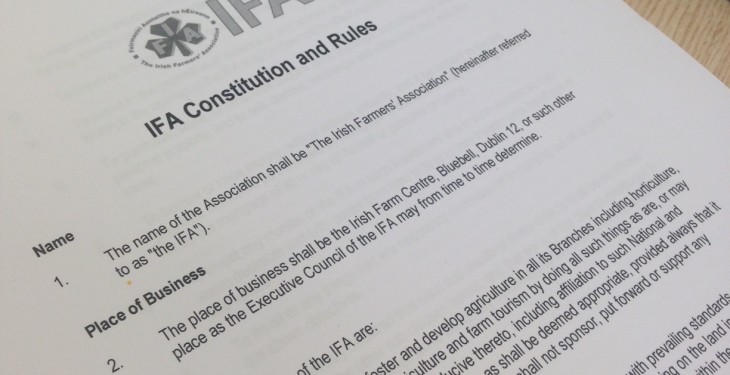 Just over 75,000 IFA members are eligible to cast a vote in the upcoming IFA elections.

Figures released by the IFA show that the Association has 75,501 fully paid up members eligible to vote in the elections for a new President and Deputy President.

IFA Chairman Jer Bergin said he remained committed to the work programme to re-build the trust of the membership; to continue the important day-to-day work of IFA in delivering on behalf of farmers; and to organise elections that will see a new leadership take over next month.

Berlin said just 528 members have cancelled their membership since the pay scandal around the former General Secretary and former President rocked the Association in November 2015.

The IFA National Chairman reported that over 96% of the 30,335 calls received since November related to day-to-day farming issues, including SFP/Basic Payment; RDP farm schemes; GLAS;  credit cases; FBD voucher and other benefits; branch AGM/election meetings and other day-to-day issues.

A total of 1,132 (3.7%) calls carried comments and complaints regarding the events in November.

Members who initially called to cancel, and then decided to retain their membership until their next renewal date, gave the following reasons:

On non-voting members, Jer Bergin said there were an additional 4,000 members who are overdue and an active programme is underway to make contact with and re-sign these people, which is a regular part of our membership work.

He said Countryside members, associate members, and other non-fully paid-up members make up a further 4,000.

Levy contributions across all channels totalled over €4.7m to IFA in 2015.

Approximately 300 refund submissions have been received since November totalling.

The update from IFA comes just a week ahead of the start of voting for a new president and deputy president of the Association.

The IFA issued the statement on its membership and levies today, in light of the revelations last year over the pay to its former General Secretary and President.

It was revealed by Agriland that questions were being raised at National Council that the former General Secretary Pat Smith was being paid more than €400,000. It was later revealed that Smith was paid a total of €542,634 in 2013.

It was also revealed that the President of the IFA was also being paid and that Eddie Downey was receiving €156,000 as a salary from the IFA, while his total remuneration package was €188,970 when topped up with fees from Bord Bia and FBD.

Further, it was revealed that the President of the IFA has been receiving a fifth year’s pay on finishing their term.

Details of the General Secretary and President’s salaries were detailed in the Con Lucey report, but only back to 2009. A number of calls have been made at IFA presidential debates around the country for other senior staff salaries to be revealed and for details further back than 2009 to be made known.