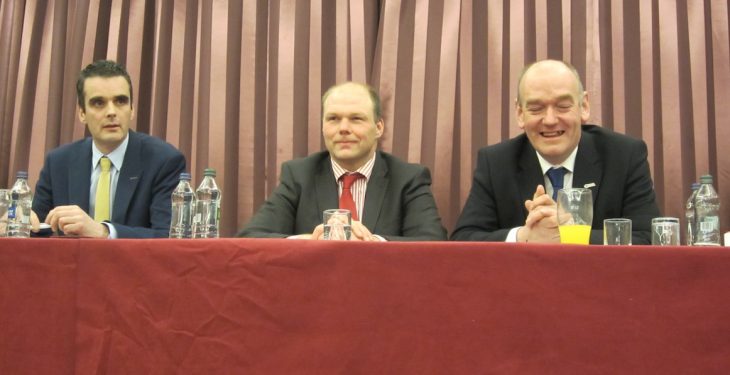 The issue of IFA levies and, in particular, the meat processors collecting levies on behalf of the IFA has been a hot topic throughout the IFA election campaign and again featured at last night’s final debate in Offaly.

All three presidential candidates outlined their position on levies at the debate following extensive questioning from the floor.

According to Henry Burns the IFA is not a business, but it should be run like business that has a solid financial base. “But we should not lose the focus that its a member organisation.”

He said that during his time as Livestock Chairman, he has heard issues around the levy and its collection time and time again and that there is a view that IFA is compromised.

But, he stopped short of saying whether this method of collecting the levies should stop.

“Members must have some part of the decision, we have to to flesh it all out and say ‘here are the options to fund our organisation going forward’.

“The people that fund this organisation are sitting in this room and we need them to be part of the decision. The levy is €4.7m, about half the running of the organisation, and we need to bring options to the membership.”

However, he did say there is only one other option to bringing in the same level of funding and thats an increase in membership fees.

Flor McCarthy told the Offaly debate that IFA levies are a “massive issue” as is how the organisation is going to be funded.

“The perception is so strong that it’s a reality. I’d love to see an alternative to the levy, but it must be pro rata.”