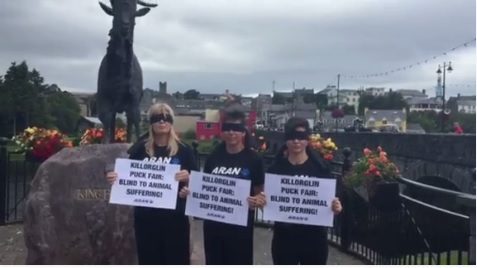 If the goats in the wild knew how well they’d be treated at the Puck Fair, they’d be queuing up to go festival, Independent TD Michael Healy-Rae has said.

The South Kerry TD was speaking to Agriland in response to animal rights activist group ARAN staging a protest at the three-day festival in Killorglin, Co. Kerry, which involves a goat being hoisted in the air for three days.

A video posted on the ARAN Facebook page shows three campaigners standing blind-folded outside the statue of the King Puck in the town holding signs saying ‘Killorglin Puck Fair: Blind to animal suffering’.

The animal rights group has said that it says yes to the Puck Fair but no to using a real goat hoisted into the air.

HAPPENING RIGHT NOW: Campaigners turn up at Puck Fair to say yes to Puck Fair but no to using a real goat hoisted into the air. Our solution? Let’s have a mechanical puck that can be pulled through the streets similar to the granny in Limerick City over the last couple of years that was a smashing hit! Huge revenue gained and everyone happy! Let’s do this together.

Healy-Rae said that any protesters that wish to protest in a peaceful way are more than welcome, but that his opinion of their opinion is that they’re wrong.

“They’re saying that there’s something wrong with the way the goat is treated.

No animal puts on weight unless he’s treated well, he’s checked over by a vet and the welfare of the goat is a priority of the organisers.

“Last year when they released the goat, it walked a short distance and was looking back, almost sadly, at the handlers.

“If the goats in the wild knew how well they’d be treated [at the festival] they’d be queuing up to go to the Puck Fair.

“If only one person turned up that person would have my respect, but this is thousands of people [attending the festival] versus three people [protesting].”

The Puck Fair festival is one of Ireland’s oldest fairs and dates back to 1613.

Each year a goat is caught in the mountains and brought back to Killorglin where the ‘Queen of Puck’, traditionally a young school girl from one of the local primary schools, crowns the goat “King Puck”.

On August 10, the ‘King’ is then paraded through the town and crowned before being elevated onto a high stand in the town square for three days.

On the third day of the fair, he is brought down to be led back to his mountain home.