The Irish Dairy Boards Purchase Price Index (PPI) rose over 4% last month from 93.1 in January to 97.5 in February.

The Index had been trending downwards  for most of 2015 and has turned a corner since the start of the new year with positive returns in both January and February.

According to ICOS this is a further indication of confidence in the market, and is significantly ahead of where the IDB had been guiding before Christmas.

Despite this the February return is still over 26% behind the same month last year and ICOS says that it still suggests a milk price below 30c/L.

However, it also says the positive move is to be welcomed.

The IDB released its monthly PPI this week and it showed a return value of 97,5, which indicates a 2.5% decrease in market returns when compared to 2010. 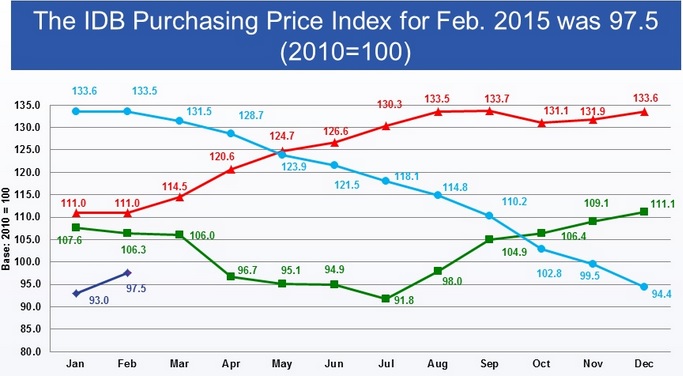 ICOS says the recent strengthening of European and global dairy markets is extremely welcome, and, for now, seems to be sustained.

It says the Eurex index has been strengthening since the new year began, and has risen from its low point, equivalent to about 21.7c/L, to somewhere around 28.7c for standard Irish constituents.

According to ICOS the question on everyone’s lips is whether on April 1, the expected surge in milk due to quota elimination will overwhelm the price driven supply constraint.

It says the introduction of volume limited pricing systems in France and the UK, and the, still weak, milk prices paid in Germany may moderate any dramatic supply increases in the Union.