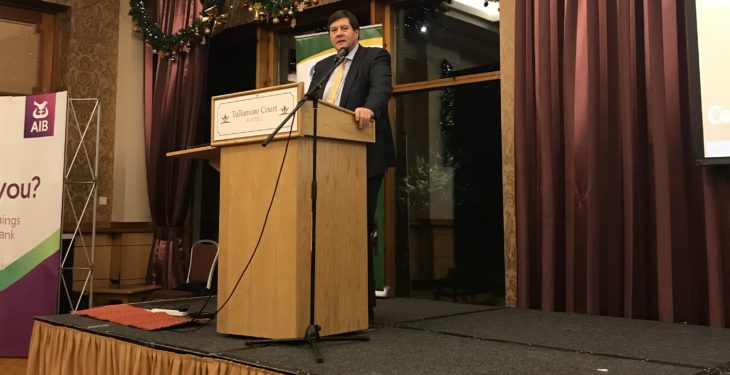 At the recent Offaly Macra na Feirme/AIB Agri Conference, in Tullamore, Co. Offaly, AgriLand caught up with one of the main speakers on the night, Paul Nolan, group development manager of Dawn Meats.

Commenting on the enthusiasm of the younger generations of farmers making their way into the agricultural sector, Nolan said: “They’re great guys and girls, we’re seeing a lot of them coming through our courses and they’re certainly all gung-ho.

And they make a very relevant point; they want to be at it if they can get a living out of it.

In response to the Department of Agriculture, Food and the Marine’s recent announcement of a trade mission to North America early next year, Nolan cautioned that Ireland may have already missed the boat.

“Previously, North America came as the ‘great promise’. At the time, the attraction of the market for us was (a) it was another outlet, but (b) it was for the manufacturing meat – and that still isn’t approved, it’s still a work in progress.

“So the net result is that I suppose we’ve missed that train a little bit. You could say though, on the other hand, the steak cut prices in America weren’t as attractive as they might otherwise have been, let’s see what happens with Brexit.

If our UK business in the long term gets affected, then the US could be a great option.

Discussing new and upcoming projects that Dawn Meats is launching, Nolan pointed to the company’s new Rustic Burger, which will be on the market shortly.

Discussing its performance, he said: “Certainly, it has been well-received at the trade shows where we’ve launched it in.”

On the matter of the beef grid system, Nolan gave a staunch defence of the set-up, stating: “All I will say is that the grading machine has been a vast, vast improvement on the human eye – so we have consistency.

Whether people agree with the actual grades that are coming through is purely down to the individual but at least we have a consistency.

“And, I think we shouldn’t be surprised at the growth in obviously the weaker grades. This is nothing to do with the quality of the meat now, it’s to do with the yield and shape of the carcass.

“Why should we be surprised when we’ve gone from one million, to one and a half million dairy cows; their influence is growing and naturally milk animals are not going to produce on their own a good R carcass so there’s a little bit of gamesmanship in my view in what people are saying about that.

“Having said that, can the grading machines of themselves be improved? Of course they can, we can get a better bulb or a better camera; maybe we can make the image a little sharper but I’m told there’s two things you need to do there. One is give it a period to test it, because we don’t want to end up with a negative result; and that takes time, a lot of tests have to be done.

But the second thing, even if it is correct, it’ll probably increase on average the grades by a half a score – so it’s not going to turn an O- into an R+, so people wouldn’t want to get carried away over that.

When asked if there is an issue with complexity of the grading system, Nolan rejected this theory: “No, I don’t think so, personally, what I love about it is it’s consistent. I have to say in fairness to the Department of Agriculture they do a heck of a lot of auditing, they keep a very close eye on them.

“I think it’s well minded, because everybody knows the huge responsibility that comes with a machine like that – because if it went out of kilter it has serious impacts for everybody,” Nolan concluded. 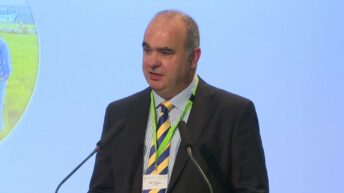