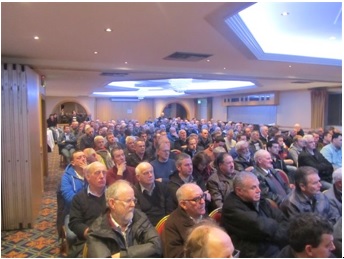 Over 350 farmers attended the first of the Irish Natura and Hill Farmers Association (INHFA) series of nationwide meetings last Thursday in The Mount Errigal Hotel in Letterkenny.

The meeting was addressed by Lorcan O’Toole from the Golden Eagle Trust who gave a presentation on the importance of the survival of the hill farmers for rural communities. A presentation was also given by Fergal Monaghan on how the GLAS environmental scheme is going to work.

INHFA members then gave a presentation on their vision for the organisation in the future.

The organisers of the Donegal meeting say that they are overwhelmed by the support they are being shown by farmers everywhere with new members flocking to them daily wishing to get involved.

INHFA recently elected an interim national committee to oversee the development of the organisation over the next year.

This was done at a meeting in Tuam in Monday on the March 2, where it was also decided to have a series of meetings across the country to inform farmers on their policies and to open their membership to farmers.

The first Chairman of the INHFA is Brendan O Malley from Galway with Michael McDonnell (Mayo) elected secretary, the treasurer is Sean Moran (Mayo) with Henry O’Donnell from Donegal elected Public Relations Officer, the assistant Chair is Joe Condon (Tipperary).

Chairperson Brendan O Malley stated that the two immediate priorities for the organisation are the issues regarding land eligibility and a workable GLAS .

The INHFA says other regional meetings are currently being set up to launch the organisation nationwide.

The Connemara launch is in Peacocks Hotel in Maam Cross on Wednesday March 11 while the south Galway region is launching in McCarthy’s of Kilbeacanty on Monday March 16.

It says more meetings are being organised in Mayo, Sligo and Leitrim and will be announced soon.