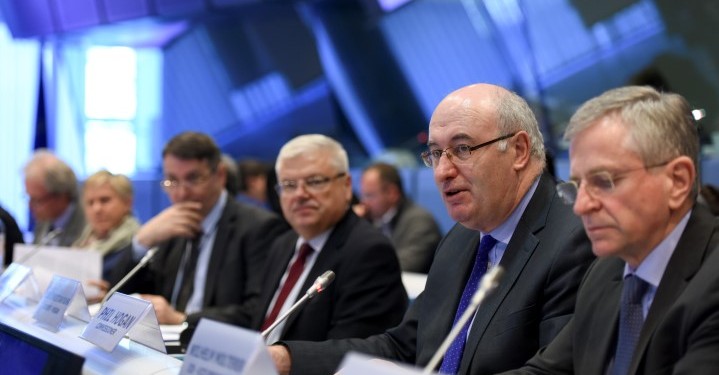 European Commissioner for Agriculture, Phil Hogan is set to introduce a yellow card system for some CAP fines such as the over declaration on lands for payment.

The yellow card administrative penalty will only apply to first-time offenders,.

The Commissioner was speaking at an extraordinary meeting of the Committee on Agriculture and Rural Development yesterday (January 18).

“For a first offender, where the over-declaration is minor (below 10% of the area declared) the administrative penalty will be reduced by 50%.

“Farmers having received a yellow card will be registered and where appropriate will be subject to an on-the spot control inspection the following year.”

Here’s what the new yellow card system means for you

The Commissioner gave an example to illustrate the changes announced:

Take a small farm holding of 10ha. Under the current system, if this farmer declares 11 hectares, his payment reduced to the actual 10ha to which he is entitled.

The farmer is also penalised twice the difference, therefore, as it is a 10% over-declaration i.e. 2ha, he would be paid for only 8ha of his holding.

Under the new system, before the yellow card kicks in, that same farmer would be penalised for only 1.5ha, ie he would receive a payment of 8.5ha.

However, with the yellow card system, the penalty would be halved if he is a first offender, to 3 quarters of a hectare (.75ha).

This means he would receive a payment for 9.25ha – a significant improvement for what might be a relatively minor, first-time error, such as accidentally including the farmyard in the aid application.

The legal basis for the preliminary checks have recently been published and hence, allow national administrations to identify problems with farmers’ applications, the Commissioner said.

Commissioner Hogan said this is so that, during a period of up to 35 days after the final date of submission, farmers will be allowed to make corrections to their aid applications without the application of any penalties.

The Commissioner stressed the importance of these changes.

“They will have a direct effect on farmers, sending a clear message that our interest is not to catch farmers out as it were, but ensure that public money is well spent. Farmers, I know, fully support that goal.

“I believe that these preventive preliminary checks as part of the aid application process will make the lives of farmers easier and even more important they will reduce significantly the number of errors and consequently of cases where administrative penalties would need to be applied.”

A simplified system of administrative penalties

Another element of this package is Commissioner Hogan’s proposal to simplify the system of administrative penalties for direct payments.

“With the new CAP, farmers feel themselves faced with new and complex rules and consequently they worry that unintentional mistakes might lead to the application of penalties and thus the loss of part of their income support.

In recognition of this understandable concern, I have decided that the current system should be improved by making it more proportionate and understandable.

The Commissioner considers it justifiable to lighten the administrative penalty for the direct payment schemes where the administration and control system is proven to be effective and the probability of detection of over-declaration is higher.

“This reduced level of penalties will apply from 2016. Small over-declarations that are up to 3% of the area declared or 2ha will continue not to be penalised.”