Both farmers and exporters continue to fight it out for the best of the weanlings, according to mart managers across the country.

The very best of these lots are currently making in excess of €3/kg, but the hammer generally dropped on the plainer types from €2.40-2.77/kg.

The cull cow trade continues to hold relatively steady, with prices for these lots ranging from €1.30-1.93/kg, mart managers say. 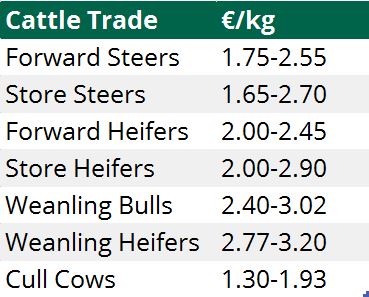 There was a good all-round trade in Macroom Mart on Saturday, according to the Mart Manager John O’Mahony, with a similar number of cattle on offer to the previous week.

Cull cows also met with a good trade, he said, with the hammer falling on the friesian types from €1.33-1.37/kg.

Despite the dangerous road conditions on Saturday, there were 190 cattle on offer in Castlerea Mart, according to the Mart Manager Brendan Egan.

However, he said that feedlot buyers were purchasing cattle at prices which were reflective of the current beef price.

Egan also said there was a good trade for weanlings, with the top prices being paid for export quality lots which sold from €2.40-3.02/kg and €2.77-3.20/kg for bulls and heifers respectively.

There was also a full clearance of cull cows, with the hammer falling on these lots from €1.66-1.93/kg, he said.

There were 510 cattle on offer in Kilkenny Mart on Thursday, according to the Mart Auctioneer George Candler.

Candler said there was a big entry of cattle, but despite this increase, the trade remained similar to previous weeks.

Candler also said there was a larger number of cull cows on offer, with the hammer falling on these lots from €0.90-1.70/kg for the dairy types and the continental types made €1.30-1.90/kg.

There was also a special sale of in-calf cows, with 90 of these cows passing through the ring. Prices for these lots ranged from €900-1,920/head, the auctioneer said.

Mayo-Sligo Mart held its first sale of 2016 on Tuesday last, and the trade continued from where it left off before Christmas, according to the Mart Manager Billy Loftus.

According to Loftus, heavy heifers were in short demand and these lots generally traded from €435-770 over. He also said that the steers traded from €450-750 over.

There was good demand from both exporters and farmers for weanlings weighting in the region of 300kg, he said, with these lots trading from €350-710 over.

Heavy dry cows also met a similar trade to the pre-Christmas period, with good demand for continental cows suitable for feeding. These lots generally made €1.60-1.95/kg, he said.