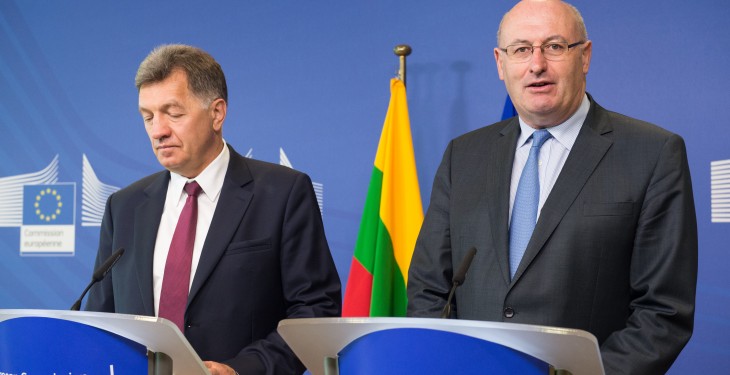 Algirdas Butkevičius, on the left, and Phil Hogan

Commissioner for Agriculture and Rural Development, Phil Hogan has met with the leaders of Lithuania and Latvia in Brussels ahead of an emergency summit of EU Agriculture Ministers next month.

Both nation’s dairy industries have suffered greatly as a result of the Russian ban and the general weakness in global dairy markets over the past 12 months.

This he said is due to both nations proximity to Russia but also their long standing export of Agricultural products to Russia is particularly acute for their farmers.

The meetings come ahead of key meeting of European Agriculture Ministers on September 7, to discuss the impact of weak dairy markets. Many nations including Ireland have called on Commissioner Hogan to agree raise intervention prices at the meeting.

However, to date the Commissioner has remained steadfast in his opposition to this proposal, consistently commenting that the dairy sector must respond to market signals.

Speaking ahead of his meeting with Commissioner Hogan, Lithuanian Prime Minister, Algirdas Butkevicius said the dairy industry in his country is going through a ‘very difficult’ time.

“In the first half of the year exports of our milk and dairy products decreased by 34%,” he told reporters.

Butkevicius, described the situation in the dairy sector in his country as ‘criticial’.

He asked the European Commissioner to provide the Lithuanian dairy producers with €50m in exceptional targeted aid.

He said the situation in Lithuania is exceptional and added that it demands an extraordinary intervention and support from the European Commission.

Some weeks ago Lithuania, became the first country to offer product for intervention since 2009 and to date has has offered over 1,900t of (SMP) to intervention.