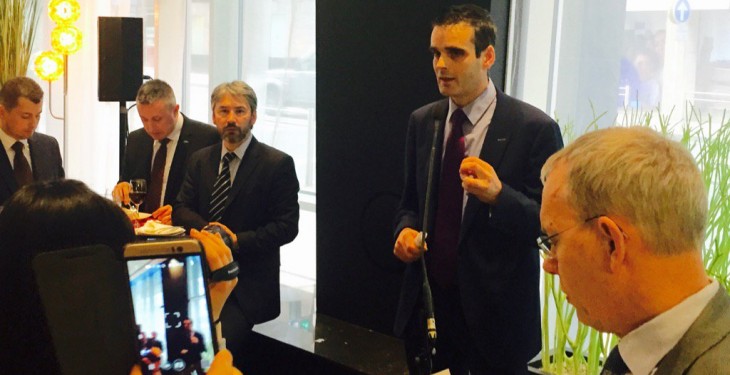 New IFA President Joe Healy and Irish lamb both featured at the launch of a two-year campaign to increase awareness of high EU meat production standards, which was launched last week in Brussels.

As part of a joint Irish, British, Spanish and French promotion of meat, the new IFA President said he was very happy that European lamb was being promoted at the event with Member States working together.

Healy explained that as a farmer from the West of Ireland, he knows how important the value of sheep production is to the rural economy, as it keeps farmers farming and keeps jobs in the local economy.

He also said that there are as many threats as well as opportunities facing the livestock sector. “The environment, animal welfare, diet/health and emissions are some, but we need to work together in order to promote the livestock sector effectively.

“With farmers incomes in crisis conditions, we need to ensure consumers are aware of the high quality standards, the high environmental standards and the high welfare standards that are adhered to by EU farmers.”

Healy also said that new markets are needed, positive media messages on the benefits of high quality European food product sand continued promotion in the marketplace. Irish lamb was showcased at the event, along with French beef and Spanish ham.

The two-year campaign aims to increase awareness of our high EU production standards, and underline the many benefits of the EU livestock sector for growth and jobs and the environment, as well as the nutritious benefits of eating European meat.

Copa and Cogeca launched the campaign to underline the multiple benefits of the EU livestock sector and meat for growth and jobs, vibrant rural areas, a balanced diet and to show the high production standards EU farmers meet.

Speaking at the event, Copa President Martin Merrild said the nutritious benefits of eating beef, veal, pork and lamb are all too clear, providing consumers with a good source of protein in their diet.

“Livestock farming is also crucial for the economies of rural areas where often no other source of employment exists. But we are up against increasing challenges, with commodity prices at an all time low and input costs on the rise.