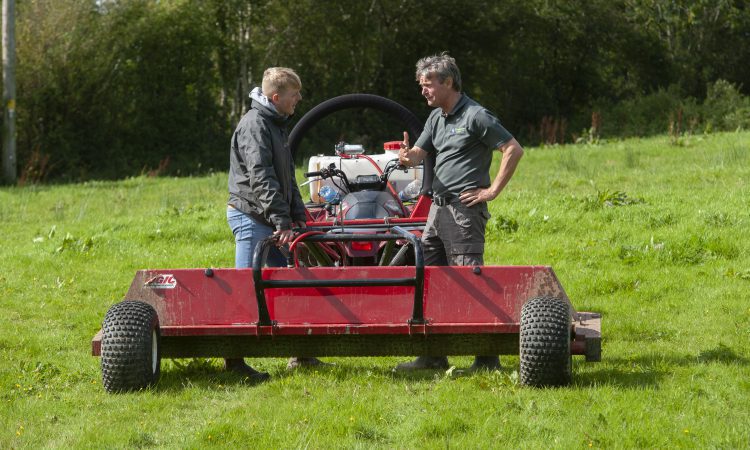 Stranooden Group Water Scheme (GWS) in Co. Monaghan is working with local farmers to protect their drinking water source and the health of families on their supply.

As part of a pilot source protection project – and for the second year running – the community-owned, community-run GWS is offering a free rush/weed-wiping service to farmers as part of its efforts to address MCPA exceedances in the supply.

MCPA is a major issue for drinking water suppliers, as it is persistent in the environment and can survive in damp or waterlogged land for more than a year.

At present, GWS treatment plants do not have the costly treatment system that would be required to deal with this issue. Therefore, the only sustainable solution is to tackle the problem at source catchment level.

The manager of the Stranooden pilot, Ross MacDonald, explains that the dry conditions in March, April and May resulted in “a high level of engagement”, as many farmers opted to avail of the weed-wiping service. Interest grew to such an extent that the scheme purchased a second quad and weed wiper to keep up with demand.

To date in 2020, 63 farmers in the catchment have benefited from the scheme, a significant increase from the 2019 season during which a total of 37 farmers participated.

The weed-wiping initiative is being piloted to determine if this method might control rush cover more efficiently (e.g. less chemical usage) and in a more environmentally-friendly manner due to the elimination reduction of spray drift and more targeted application, compared to conventional boom sprayer applicators.

From the evidence to date, one local participating farmer John McConnon says that he is “very encouraged”. With a large extent of rush cover on his land – typical of the poorly-draining gley soils of the region – he cut back the rushes five-to-six weeks after they were wiped in April. The results surpassed his expectations.

“90% of the rushes that were treated have not come back and grass has successfully re-established,” he said.

The project team also treated some of his broadleaf dock that was sitting high above the grass and this too proved a successful treatment. As a result, John has not had the need to use MCPA or any other pesticides on his farm this year. This is a win for him and a win for the drinking water supply too.

By offering the weed-wiping service, the GWS has opened lines of communication with the local farming community about other aspects of source water protection, including the potential for installing vegetative buffers as mitigation measures to prevent pollution from overland flow of contaminants.

Pesticides are not the only contaminant the group water scheme is focusing on. Nutrients, and dangerous bacteria, viruses and protozoa from animal and human waste is a major target of the pilot project.

To date, 18 farmers have signed up have a total of 12,000m of fencing installed as a means of preventing direct access by livestock to water courses. An alternative water source is being provided for the animals.

Hedgerow is being planted in parallel to one-third of the new fencing, while 12 of the farmers are introducing woodland buffers, completing bank re-profiling – including willow spilling – and establishing extended willow buffers at strategic run-off locations.

It is anticipated that all of these measures will improve water quality and will improve local biodiversity as a bonus.

Pointing out that “the more farmers, local residents and businesses that come on board the better”, Ross MacDonald cautions that there is still some way to go before the problem of herbicide contamination will be dealt with, notwithstanding the weed-wiping service.

“MCPA results to date this season are well above permitted limits for drinking water. From visits to local co-ops and hardware stores, we learnt that of the 14 products available that contain MCPA, seven are targeted at the domestic gardener,” he said.

The contribution of this domestic use of pesticides also has to be addressed. Our aim is to get the message out to the whole community through information signage and leaflets, along with a campaign in the Ballybay urban area to encourage residents to move away from pesticide use, to improve water quality and wider biodiversity.

He continued: “We all have a role to play in protecting our local water sources and in this predominantly rural catchment, it is vital that a close working relationship is developed and maintained between the farming community and Stranooden GWS, which supplies water to 1,200 households and hundreds of farms in the mid-Monaghan area.

“Farmers were instrumental in establishing this scheme back in the 1970s and it is in their interests as well as ours that we co-operate in reducing risks to public health from agricultural activities. That is the goal of our pilot project,” MacDonald concluded.

Below is a video of David Nally, Co. Roscommon, speaking about why he weed wipes instead of spraying pesticides.