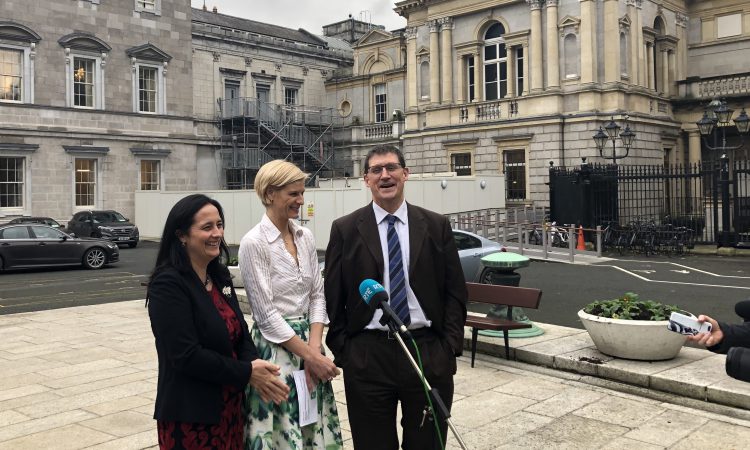 The Green Party’s spokesperson on agriculture has been officially unveiled as a new member of Seanad Éireann, becoming the party’s third member of the Oireachtas.

Former Offaly county councillor Pippa Hackett – who is a farmer – will join party leader Eamon Ryan and Catherine Martin (both members of the Dáil) as part of the ‘Greens’ Oireachtas contingent.

All three were present at a press event at Leinster House to launch Hackett’s term in the Seanad.

In response to a question by AgriLand regarding environmental demands and farmer incomes, Hackett questioned what she said called the current “model” of agriculture in Ireland.

If we look at the model we’ve been following, with farmers being encouraged to increase output – whether it is dairy, obviously, in a big way, and in beef also – that’s coming at lower prices, particularly in the beef sector.

“My vision is that if you continue that way, your price is going to suffer even more, so let’s try to condense and up the quality in what we produce,” the new senator argued.

Hackett continued: “Let’s produce something that differentiates itself in the marketplace. I think if we can do that – and I think the way to do that is by examining how we farm and the models we use – I think that price will follow.

“There’s enough people in this world to feed at a very high quality of food,” Hackett added.

Hackett’s election to the Seanad was announced late last week. At the time, the then Offaly county councillor said she would “represent farmers who are tired of the status quo and want to see a new vision for agriculture in Ireland”.

Her party leader, Eamon Ryan, commented that Hackett’s experience would “inform debate in the Seanad, especially at a time when our agricultural system is in real crisis”.