This week saw the second major announcement of grain prices for Harvest 2020 here in Ireland and also saw the markets stay in positive form. Farmers may even consider looking at futures markets and consider selling grain for next harvest.

Glanbia Ireland released its prices on Tuesday (October 20). Members of the co-op will be paid a price of €160/t for feed barley and €181/t for feed wheat (it should be noted that these prices include a trading bonus of €10/t and a co-op support bonus of €5/t).

A full list of the prices can be seen below.

Glanbia member-only prices which include a trading (€10/t) and a member bonus (€5/t):

Boortmalt offered growers a fixed price of €185/t for malting barley for next harvest this week. Growers could fix up to 20% of their contracted tonnage for the season ahead.

Free-On-Board (FOB) Creil malting barley was trading at a spot price of €195/t on Friday morning. A futures price was not available to AgriLand.

Dryness is causing concern in North and South America where planting is happening or due to happen soon. On Tuesday (October 19) the United States Department of Agriculture (USDA) released its latest Crop Progress Report and it noted that topsoil moisture condition was described as adequate on 41% of land.

Planting is progressing well in some states. However, some states still have large amounts of planting to complete.

For example, Arkansas had 34% planted, while California had 20% of its winter wheat planted as of October 18. 51% of the winter wheat crop is estimated to be emerged.

On the continent this week feed barley (delivered Rouen) was trading at €193/t on Friday morning (October 23). Corn (FOB Bordeaux) was also at €193/t at that time.

This week saw nearby LIFFE wheat increase by almost £5/t across the week. Matif wheat for December stayed positive. It finished at €211.75/t on Monday (October 19) and on Friday morning was at €210.25/t. 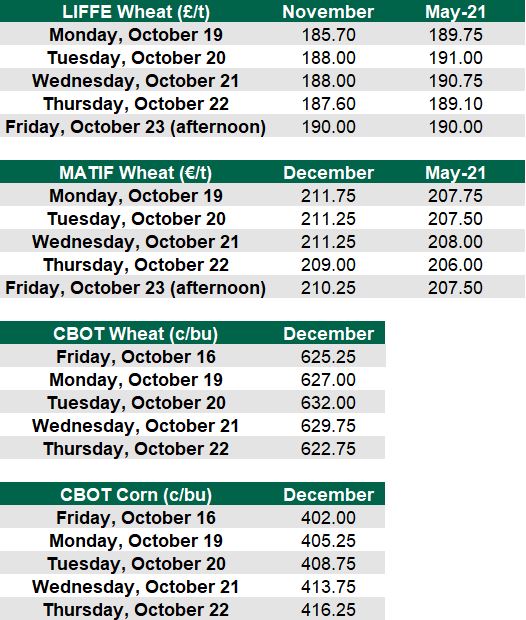