One take-home message that stuck with AgriLand on the way back from the Cereals 2018 event in the UK this week was a comment from a grain trading analyst, who said: “Consumption is exceeding production for the first time since 2012.”

As Irish farmers worry about potential crop yields, particularly in spring crops, it is the world market that will affect the price in this country. On this, weather continues to pose a risk to grain yields in Russia and the Ukraine.

Australia – the world’s fourth largest exporter of wheat – is also in need of rain; its wheat harvest is expected to be down by 1.8 million tonnes for the 2018/2019 season.

While it is still early in the season to predict yield, total production looks like it will be affected by this weather.

Harvesting is well underway in the US, as combines roll in places like Illinois and Kansas; a better picture will become clearer as this moves on. However, the USDA (United States Department of Agriculture) forecasts that Kansas wheat production will be down 19% from 2017.

The advice from traders in the UK was also to hold off on sales and “not to be bullish”. 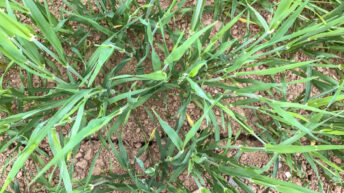