There are good prospects for the 2015/2016 world cereal harvest, the European Commission has said in its Short-term Outlook.

Recent reports from the International Grain Council (IGC), the US Department of Agriculture (USDA) and FAO-Agricultural Market Information System (AMIS) see a 2015/2016 world cereal production decreasing from the previous record year but still above average.

The IGC expects world production to fall by 2.3%, with wheat stocks dropping by 0.9% which the Commission saying is because of an increasing food and industry consumption.

Maize stocks, it says are to decline by 6.7% bringing the stock-to–use ratio from 20% to a still ‘comfortable’ 19%, the Commission says. 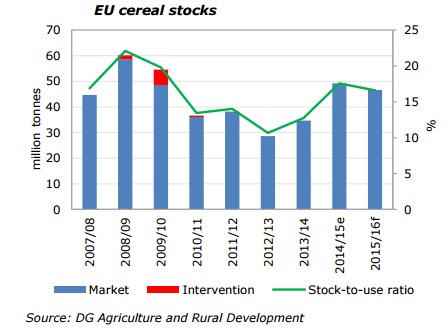 Overall yields however, are expected to return to more normal levels, it says.

The production reduction compared to last year, the Commission says, is projected for all cereals with the exception of durum wheat (+3.7%).

Durum wheat areas (+4.2%) at the time of sowings were fostered by better prices, it says, compared to the previous year and by the introduction of voluntary coupled support in some regions.

However, a slight reduction in yields is expected (-0.6%), due to adverse climatic conditions (dry and hot spells) in southern Spain (Andalucia) and southern Italy (Puglia), it expects.