The increase is lower than expected with many signalling that recent activity of the New Zealand futures market suggested a rise of 10% could be possible.

Many had suggested that recent lower milk production forecasts for New Zealand would help the market rebound significantly from recent lows.

Prices at the previous Global Dairy Trade auction increased for the first time since early October.

The event saw the GDT Price Index up 3.6% prior to that the GDT overall dairy price index fell 7.9% for the third consecutive auction fall.

Overall and Whole Milk Powder (WMP) prices had fallen 17% and 22%, respectively, through October. 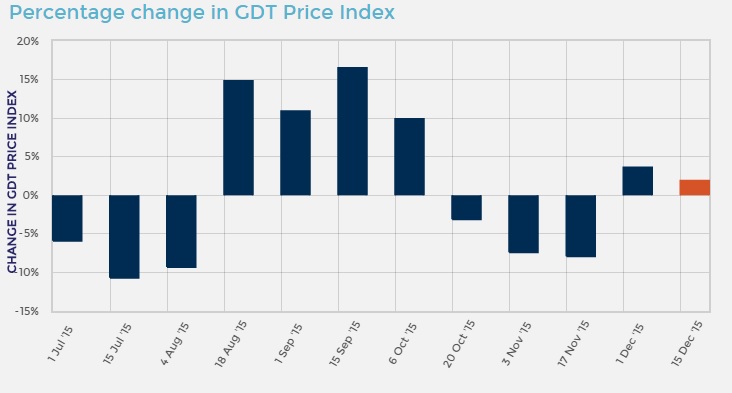 Fonterra had stated previously that it expects its own milk collections to fall by 5%, but now expects “New Zealand volumes to be down by at least 6%”, according to its statement last week.

According to Nathan Penny Rural Economist with ASB bank, New Zealand production so far this season has been confirmed as weak and the outlook is for further weakness.

“We see the current prices as out of whack with dairy fundamentals.

“We do note that the market is factoring in some milk powder scarceness later in the season – prices of later-dated WMP contracts are around $300/MT higher than near-dated ones.

“While we agree with that pattern, the overall price level is still too low,” he said.

Penny said he continues to point out that the market assumption that other producers like the EU will pick up New Zealand’s slack is misplaced.

“Lost New Zealand exports are too big to cover,” he said.