Talbot picked up the accolade at the inaugural gala awards ceremony held in Dublin’s Mansion House last night, where An Taoiseach Leo Varadkar was a guest of honour.

Delighted and honoured that our Group MD Siobhan Talbot is named @IrishTimes Business Person of the Year. Thank you and congratulations to all nominated #ITBusinessAwards pic.twitter.com/ksOvty8xbz

Glanbia’s managing director picked up the initial award in May of last year for overseeing the creation of the new joint venture, Glanbia Ireland.

Advertisement
Also Read: Glanbia Co-op shareholders clear the way for the creation of a new venture

Talbot was appointed to her current position in November 2013, having been appointed group managing director designate in June of that year.

Previously, she held the position of group finance director – a role which encompassed responsibility for group strategic planning.

She has been a member of the group operating executive since 2000 and the board since 2009, alongside having held a number of senior positions since joining the group in 1992.

A fellow of Chartered Accountants Ireland, Talbot graduated from University College Dublin (UCD) with a Bachelor of Commerce and Diploma in Professional Accounting.

Meanwhile, construction materials giant CRH took home the ‘Company of the Year’ award. Mark Bourke of AIB was named ‘CFO of the Year’ and Irish sports technology company STATSports won ‘Deal of the Year’ for its €1.14 billion deal with the US Soccer Federation.

The final award on the night went to Mark FitzGerald, chair and former CEO of Sherry FitzGerald, who was named ‘Distinguished Leader in Business’.

Commenting on the awards, KPMG’s managing partner, Shaun Murphy, said: “One of the most satisfying and enjoyable elements of being an advisor to business in Ireland is seeing firsthand the issues which motivate Irish business leaders and drive them to succeed across a range of companies and sectors.

“Ireland has so many exceptional business people; these awards celebrate those exceptional people.” 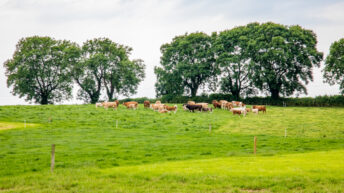