Glanbia Ireland is the latest processor to announce a price increase for June milk, following a similar decision by Lakeland Dairies earlier this week.

Its suppliers will be paid a base price of 33c/L including VAT for milk produced during the month of June.

The processor has increased its base price for June by 1c/L for manufacturing milk at 3.6% butterfat and 3.3% protein.

This is the second consecutive monthly increase of 1c/L announced by Glanbia. Prior to increasing its May milk price, the processor had held its price at 31c/L for three months in a row.

The Chairman of Glanbia, Henry Corbally, said: “The market for butterfat in particular has been positive, helped by reduced milk supply from Europe’s largest producers – France and Germany – while in contrast, powder markets are more challenging.

“The board will continue to monitor market developments on a monthly basis,” he said.

Meanwhile, Corbally also described today, July 13, as a “historic occasion” in the evolution of the Glanbia organisation, with the first board meeting of the newly-formed entity, Glanbia Ireland.

It was established in July 2017, following the “overwhelming support” of Glanbia Co-op members at a Special General Meeting held in Punchestown in May.

“I want to thank our members who strongly endorsed the creation of Glanbia Ireland and
I look forward to their support for the new organisation,” Corbally said.

In relation to Glanbia’s Fixed Milk Price Scheme, Corbally confirmed that the scheme was over-subscribed when applications closed on Friday, July 7.

The scheme is set to pay a fixed price of 32c/L for the full year of 2018; allocation volumes are expected to be communicated to suppliers in the coming weeks.

Lakeland Dairies was the first processor to announce its decision to increase its milk price for June supplies by 1c/L. Suppliers of the processor will receive a June milk price of 33c/L including VAT.

This is the second consecutive monthly increase announced by Lakeland Dairies; it also increased its May milk price by 1c/L last month. 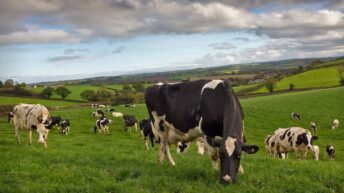 EBI proving its worth in the Next Generation Herd