This is according to an Interim Management Statement issued by the global nutrition group on the same day as that its Annual General Meeting is taking place in Co. Kilkenny.

On a reported basis – reflecting the weaker Euro / US Dollar foreign exchange rate – revenue decreased by 8.1% when compared to the same period in 2017, the statement added.

The key driver of revenue increase on a constant currency basis was reportedly due to volume growth from both Glanbia Performance Nutrition (GPN) and Glanbia Nutritionals (GN) which was 7.2%.

“Glanbia Nutritionals also delivered volume growth across its portfolio. The year has started as planned and we reiterate our full year guidance of 5% to 8% growth in adjusted earnings per share, constant currency, from the continuing group (pro-forma) in 2018 with growth to be delivered in the second half of the year,” she said.

In the first quarter of 2018, GPN saw its revenue increase by 9.3%; this was reportedly driven by volume growth of 5.5% and the Body & Fit acquisition delivering 7.8% – offset by a price decline of 4%.

This morning’s statement added that GPN delivered volume growth in both the US and other key international markets.

“The full year 2018 outlook for GPN is good. Guidance is reiterated for delivery of like-for-like branded volume growth in the mid-to-high single digit range,” it said.

Meanwhile, in line with expectations for the first three months of year, GN delivered revenue growth of 1% compared to the same period in 2017; this was driven by a volume increase of 8.6% – offset by a price decline of 7.5%.

Similarly, the outlook for GN is positive – guidance is reiterated for volume growth in Nutritional Solutions in the mid-to-high single digit range for the full year. This will offset market-related price declines in US cheese and dairy ingredients, the statement explained.

Regarding joint ventures, revenues increased by 29.7% in the first three months of 2018, it added.

The transaction to create Glanbia Ireland delivered 34.8% revenue growth, volume growth was 4.3% and this was offset by a price decline of 9.4% as a result of comparatively lower year-on-year dairy markets.

“As a result, the outlook for joint ventures is for earnings to be reduced in 2018 versus the prior year – particularly in the first half of the year,” the statement said.

Almost cutting its net debt in half

As part of its interim statement, Glanbia declared that its net debt at the end of March was €385 million – almost half what it was 12 months ago.

Its net debt has reportedly decreased by €350 million versus the net debt position at the end of the first quarter of 2017.

This improvement has been primarily driven by the receipt of proceeds from disposals made in 2017.

“The group’s balance sheet is in a strong position and Glanbia expects to deliver over 80% operating cash conversion of EBITDA (Earnings Before Interest, Taxes, Depreciation, and Amortization) in 2018. Total 2018 capital expenditure is expected to be approximately €75 million to €85 million,” the statement said.

As part of its outlook for 2018 as a whole, Glanbia reiterated its guidance that – on a pro-forma basis – adjusted earnings per share for the continuing group is expected to grow between 5% and 8% constant currency.

Earnings growth is expected to be delivered in the second half of 2018.

Comparative dairy market pricing and planned investments will deliver a reduced performance in the first half of the year. 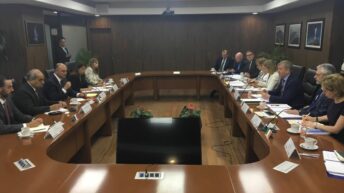