Hundreds of beef farmers flocked to Tullamore for the IFA ‘Beef Challenges 2017’ event last night, were many struggled to see a future for Irish suckler and beef farming.

The almost 300 farmers in attendance were reminded that an additional 100,000 cattle will come on stream in 2017, while ‘unsustainable’ beef prices were also prominent on the night.

Farmers were visibly anger, with many questioning whether or not there is a future for the Irish suckler cow given the low returns associated with such enterprises in 2016.

One farmer on the night stressed that farmers need a bigger slice of the pie from processors.

Otherwise we are not going to remain in business. It is as simple as that. All we want is fair play and we are certainly not getting it.

He also questioned the reasoning behind the beef price fall following Brexit.

“Over two consecutive weeks, and I know this because I was killing cattle at the time and the cattle died in debt, the cattle fell 10c/kg which was in effect taking €120-130/head of my cattle,” he said.

The farmer added that this was an act of opportunism on the factories part, while he also wondered about the reasoning behind factory price cuts on over weight carcasses.

“The factories aren’t losing money on my carcasses, there is no doubt about it. They wouldn’t be buying them off me if they weren’t making money out of it.

We are not getting fair play and all we want is fair play. We want a larger piece of the piece. We want a fairer return from the market place. 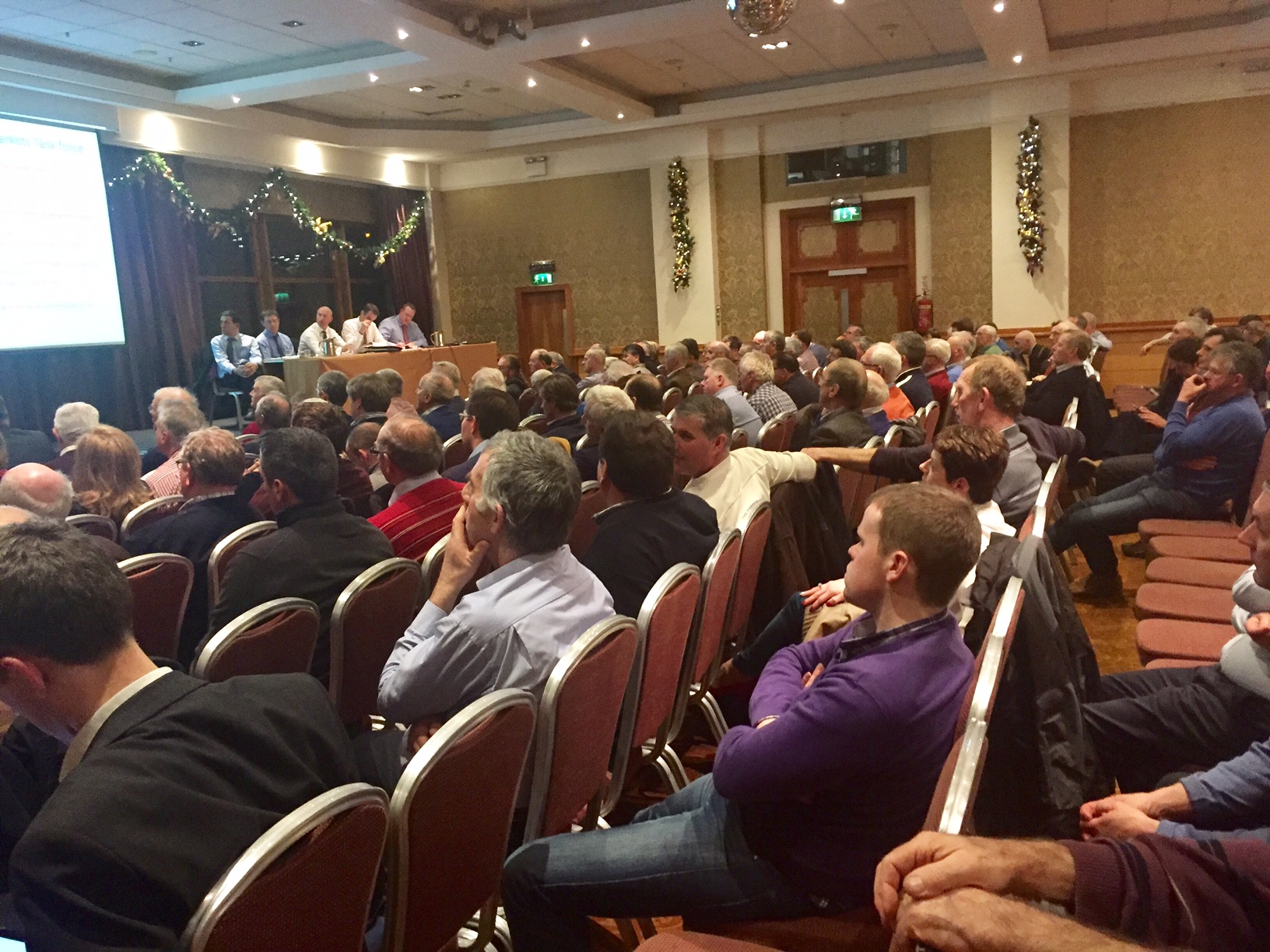 Farmers in attendance at the ‘Beef Challenges 2017’ event

Poll: Your future in beef farming

Speaking from the floor, a Kilkenny-based farmer said farmers need serious answers on the future of the industry.

“There is a lot of suckler farmers going to make the decisions whether to put them heifers in calf, or indeed the suckler cows in calf next spring based on what they have heard here tonight.

He added that what farmers need to breakeven from beef production and what factories are currently paying for beef is poles apart.

On the issue of increasing efficiency he said, he has gotten as efficient as he can become.

“At present prices, the only way we can go is the by product of the dairy herd. The suckler cow at a beef price of 370c/kg is finished,” he said.

Another farmer from Co. Limerick said farmers are not in beef production for the fun of it.

“We have invested into putting up buildings and improving our grasslands, improving housing and our herds.”

He said that if the beef price is not increased to the Teagasc breakeven price, there will be a revolution in 2017 as farmers will move away from beef production.

Speaking from the floor another farmer from Co.Cork said beef farmers had ambitions and growth plans, but there has been a lot of cold water poured on those in recent times.

He also said that there isn’t much evidence that beef farmers and processors are working together.

Immediately after the Brexit vote at the end of June, at a time when the UK price was rising and the EU price stayed as was, we as beef finishers took a 20c/kg cut in our beef price.

“More recently Sterling has moved from 90p to the euro back to 83-84p, which equates to about 25c/kg and we have seen no evidence of that either.

“Call a spade a spade and if we are supposed to work together we need to see some evidence of it. Winter finishers are goosed and they can’t reinvest in their businesses.”

Minister Doyle 'hopeful' that Genomics scheme will reopen in 2017