Fun in the sun at Lisburn and Saintfield District Show 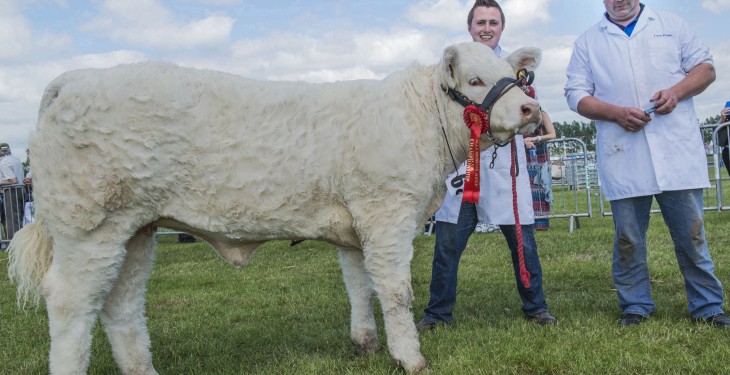 The old saying that quality will always rise to the top was proven in spades at last Saturday’s Lisburn & Saintfield District Show, courtesy of the McElroy family’s victory in the beef Inter Breed Championship with their truly immense Blonde cow.

Home bred, Ivaniskey Denise – entered with her own calf at foot – stood out in the final beef class of the day among a group of animals that reflected every positive attribute associated with pedigree beef breeding in Northern Ireland. These included the Martin Brothers’ Belgian Blue cow – Springhill Harp – who, on any other day, might well have lifted the supreme beef title herself for the Newtownards-based combined dairy and beef operation.

“We are delighted with today’s result,” William McElroy told Agriland.

“Denise is home bred, sired by the renowned bull Duncombe Aga Khan. She is also a dam of elite cattle herself. Last year, one of her bull calves was awarded the Blonde Championship at Carlisle.  Denise’s mother was the first cow to be flushed for embryos that were subsequently exported to Australia.”

Meanwhile, in the dairy ring Clandeboye Estate was having an equally successful day. The Inter Breed Dairy Championship was awarded to the Jersey fifth calver Clandeboye Paramount Brunette. Obviously delighted with this home bred success, Estate Manager Mark Logan was quick to highlight the quality of Jersey milk and its use in the Clandeboye Estate yoghurt range.

“Approximately half of the milk now produced on the Estate is destined for our yoghurt business. And it is helping to stabilise the overall price that we can secure for every litre of milk produced,” he explained.

“In 2012/13 the average price that we received for that proportion of the milk which went to United Dairy Farmers was 26 pence per litre. The equivalent price generated by the milk used to make yoghurt was 50 pence.

“For the 2103/14 year, the average price from United rose to around 34 pence. But this was still well below the 50 pence which the yoghurt operation continued to generate. Global milk markets are notoriously unpredictable. At the present time we are selling yoghurt into high value retail outlets throughout the UK and Ireland. And by taking this approach we have managed to remove some of the volatility that is now so associated with commercial milk production.”

“She is home bred and is sired by the outstanding ram Rory, which we bought for 7,000 guineas three years ago. Our plan is to take her to the Northern Ireland Shearling Ewe Championship Finals at Antrim Show in July. After that, the objective to get her in lamb,” he said.

Reflecting on the day’s events Show Society Chairman Crosby Cleland told the News Letter that a combination of the good weather and the expanded facilities available at Balmoral Park were responsible for the tremendous increase in the number of visitors that took in the sights and sounds of Saintfield Show 2014.

“The move to Balmoral Park has really worked in our favour. We have the option of using the facility again in 2015. And this is an issue which the Show Committee will actively address over the coming months.”