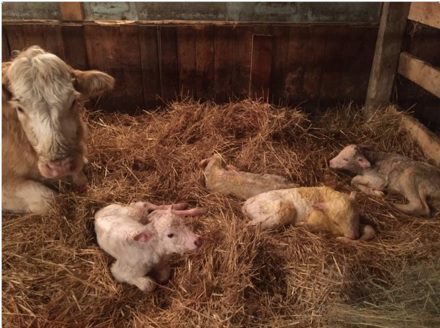 A five-year-old Charolais cow has given birth to quadruplets on a farm in Saskatchewan in Canada.

It is believed that the odds of quadruplets are 11.2m to one.

Kayla Lamport, who’s family owns the cow, tweeted a photo of the cow and her four healthy calves.

Local media reported that the Lamports expected the cow to give birth to twins, as she had two previous sets, but they weren’t expecting quads.

Speaking to the Regina Leader Post, Lamport said that it was completely unbelievable.

“We stood around like ‘Holy crap, is this real?’

“It’s just really great that we were able to help bring all four into the world and that we can keep them alive, keep the cow alive and make sure they’re all happy and healthy,” she told the paper.

The two bull and two heifer calves have been called Abbi, Bruce, Charly and Duke. It’s understood that they weight a total of 189lbs.

Quadruplets born tonight on our farm in SE Sask! Unbelievable!! Chances of this are 1 in 11.2 million!! #beef pic.twitter.com/ory0SVmlst

Last year, a cow in Texas in the US gave birth to quadruplets, which owner Dora Rumsey Barling called  Eeny, Meeny, Miny, and Moo.

Local veterinarian Michael Baird said he has never gotten so much credit for doing something so little in his life.

“The calves were pretty fragile when they hit the ground, pretty small and there has been a lot of around the clock nursing care,” he said.