The first thing that strikes you when you walk into Thomas O’Connor’s yard is that you could eat your dinner off the concrete. Animals are content with silage in front of them and are completely unaware of the struggle the farmer on the teleporter is undergoing to feed them.

Thomas is a young, well-organised farmer striving to be as efficient as possible by planning ahead and managing grassland. However, the fodder crisis has hit his farm – and farms all over the country – hard.

Farming in Moone, Co. Kildare, Thomas has been without his own fodder for the past two weeks. He sourced silage in nearby Castledermot, but this will run out this weekend.

The young farmer made 20 phone calls, enquiring about silage, on the morning that AgriLand visited; the calls were to no avail.

During the visit, a neighbour called in to inform Thomas that he had straw available and knew of someone who had some silage. This is how the majority of people are getting through this crisis – their neighbours and friends. 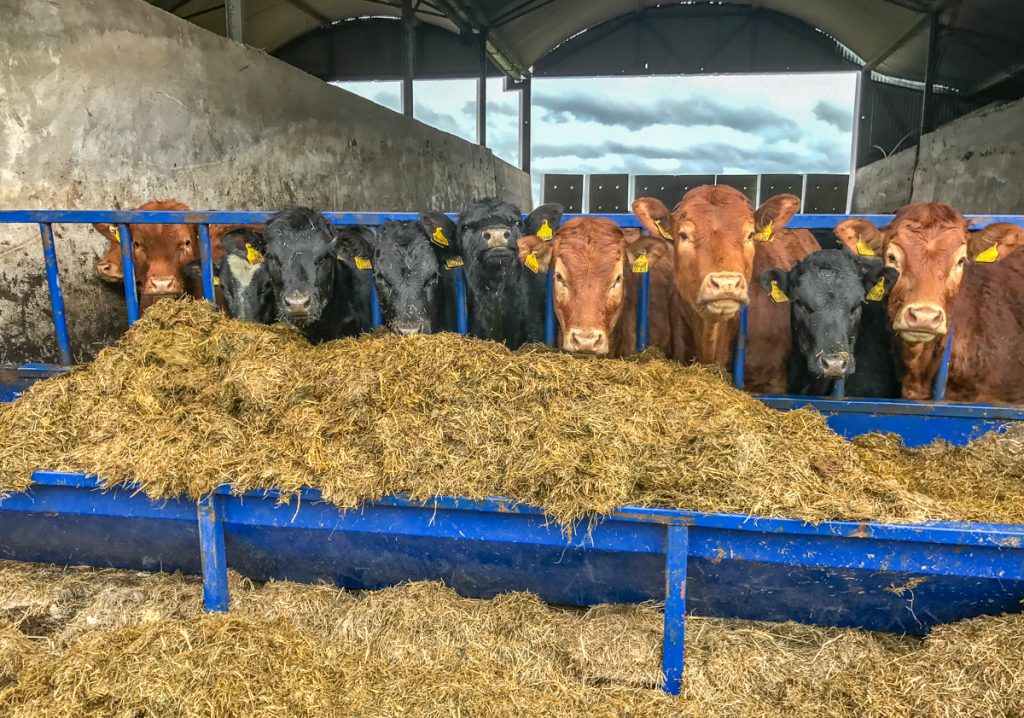 7.5t of silage per day is just feeding all of Thomas’ animals

“I found the silage I have now through my Teagasc advisor. This is the end of the second week drawing silage from there. It will do me until this weekend. I’m getting 7.5t of silage per day and that’s just enough to feed the cattle.

I was completely out of fodder two weeks ago. Last year, I turned out the first cattle on February 13 and they never came back in.

The persistent rain has prevented animals going out onto the land. On this, he said: “There would have been enough grass. It’s well set up in paddocks. The fertiliser and the slurry is out.”

Thomas has always had cattle out by St. Patrick’s Day. He let out some cattle in March, but they came back in a few days later.

“I’ve been home full time for about seven or eight years and this is the first time that we haven’t had all of the yearling cattle out before St. Patrick’s Day.

“I put out yearling bulls to grass on March 24 and I had to put half of them back in on Monday and the other half in on Wednesday. The rain this week finished it. I had 30 cows and calves out as well and they had to be re-housed.” 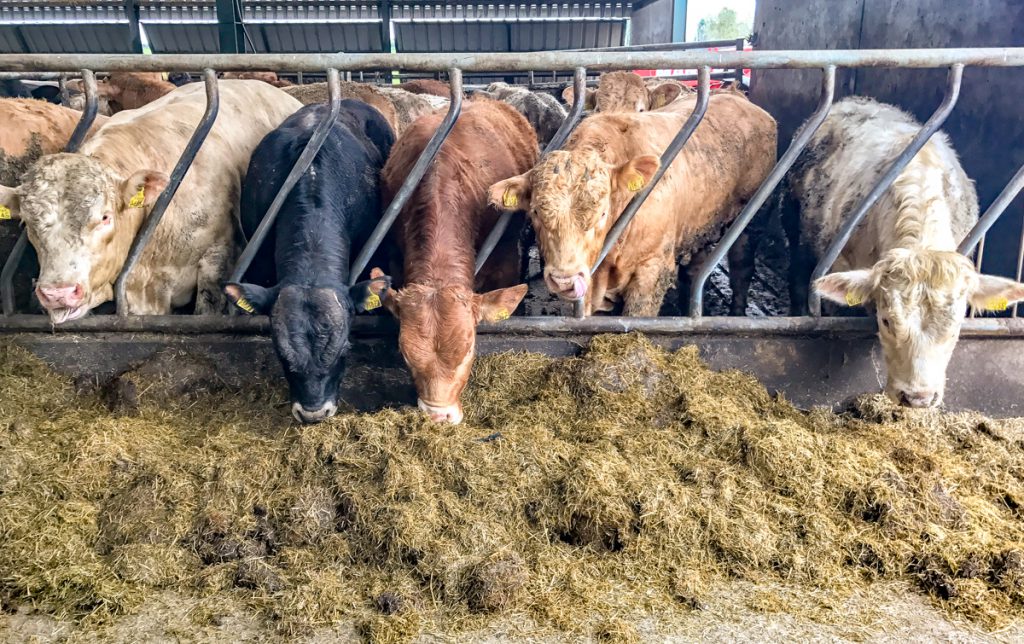 Some of the heavier cattle on the farm

Thomas sold cattle on Wednesday, April 4. However, he finishes a certain number of animals each year and has already organised to replace the sold stock.

“I’m trying to get into a system where the shed is full the whole year round. I killed cattle yesterday (April 4) and I have them replaced already.

“I have all my cattle bought for grass. That’s putting me under pressure as well. I normally like to buy my cattle early in the spring because they will put on about 30kg in March.

The thrive they achieve in March – that 30kg – stays with them the whole way through. The cattle that come in at the backend of the year will be lighter now.

Thomas outlined that he needs straw to bed his cows and calves, adding: “I had to buy straw two weeks ago. I have suckler cows and calves and I have to keep straw under them to prevent pneumonia.

At the price of straw now, I’ll have to feed it. 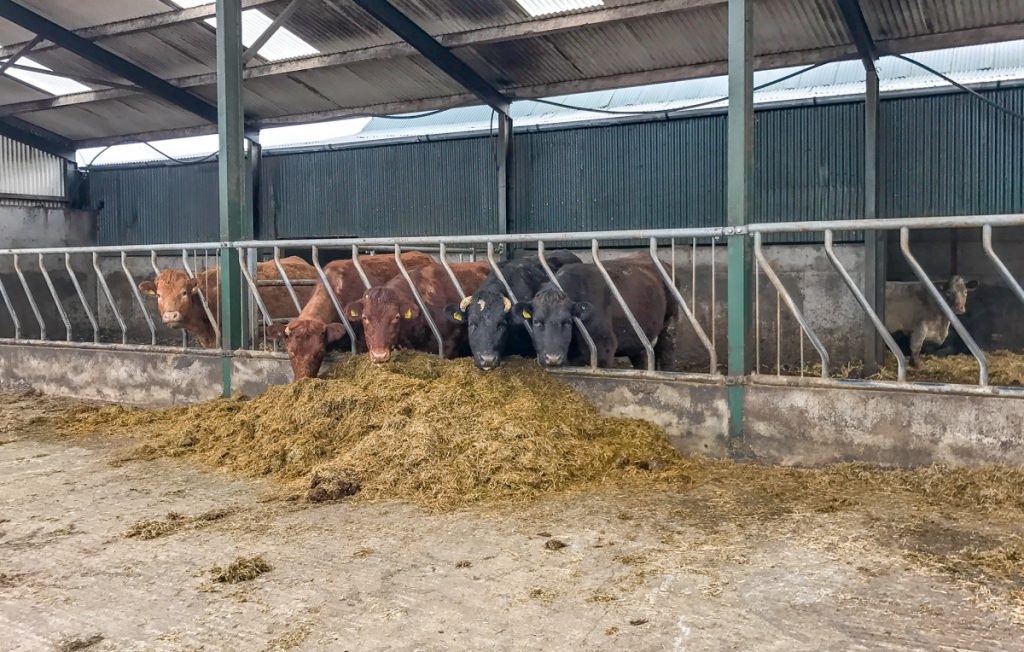 Thomas has increased meal feeding and is also trying to source alfalfa from his local co-op.

“I’m feeding more meal to try and reduce the silage demand. I was actually just on the phone to my local co-op and I was the first person to enquire about the alfalfa coming into the country,” he explained.

It is not just Thomas that has found himself in this situation; many of his friends are encountering the same problems.

“The majority of my friends have enough for the next three-to-five days; a week is the most people have. A few of my friends who are milking said that they’re feeding more meal. However, their proteins are down and it’s costing them about an extra €1,800/month,” he added.

Thomas has a positive attitude to the whole situation, but he’s clearly under pressure.

“My neighbour is after giving me the name of another man to try. If that doesn’t work out, I’ll probably be able to get a load of maize from another neighbour.

It’s literally neighbours helping one another out; I’ll try and get alfalfa if that comes into the co-op.

Thomas hopes to get out to grass with some animals as soon as possible to reduce demand.

“We’re not too bad; we have grass. I think the weather is to improve next week. If we got over these 2in of rain at the weekend and got four or five days of dry weather, I’d get out next week. I hope to get the young bulls and at least half of the cows out as well,” he concluded.