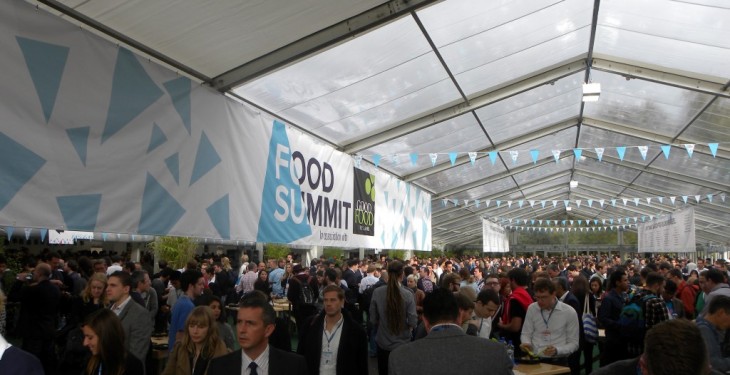 Jeffares said: “Were delighted to be here at the food summit the initiative between the web summit and ourselves, it is designed to showcase the very best of Irish artisan food produce and our cooking.

“You just have to look around the summit today; it’s an amazing group of people. All high earners, all very savvy about their food. Even the requests we got in advance, from vegetarians, celiac’s among others. These people have a really strong interest in where the food is coming from. Even chatting to the delegates now asking them what they think about the food. It’s a fantastic audience to promote Irish food.”

According to Jeffares: “What Good Food Ireland as a industry group have been trying to do since we pioneered food tourism 7 years ago, is trying to bring to people visiting the country an Irish ingredient led food experience.

“So that people can eat that authentic food of our country. Obviously there are huge economic benefits for the country and not just the hospitality sector, but also the agri-food sector,” she added.

“The reality is by promoting the local food produce, we create an economic viability all the way through the chain. We did a survey recently which showed 97 per cent of our Good Food providers said they had increased their purchasing of Irish food for the last three years. And that contributed in the region of €50m to the economy. It’s a no-brainer.

“Tourism and agriculture are two of the biggest industries in Ireland and it’s about bringing them together. That’s what Good Food Ireland has done and is continuing to do.”

Commenting on the origins of the food summit, she said: “It was very much last minute. We had to get planning permission. We had to organise a 300 sq metre marquee and all the logistics to be put in place in a short period of time. Then we had to mobilise more than 70 businesses from all over the country to come together on a voluntary basis and to provide their food. We had 10 days to do this.”

Jeffares cited: “We are feeding up to 10,000 delegates a day. There is massive co-ordination involved. It was just incredible. The membership of Good Food Ireland are to be applauded. When we decide to do something we do it to the best of our abilities. There is  good food in Ireland. But you have to know where to find it. That’s what Good Food Ireland is trying to do. Giving the international visitor a touch point for where to find a great Irish food experience. The feedback has been amazing today. When you think about it, these delegates are here at a conference. Where would they get the commitment from the chefs, cheese makers, butchers, bakers among more to present to them their food. There having the opportunity to engage with the Irish people behind that food.

“Many have never been to Ireland before and tasting our food has been an incredible experience for them. They had no idea that Ireland had such good food,” she added.

According to Jeffares, there is more than 400 international journalists coming though the food summit. “Let’s hope they go home and write about the excellent food Good Food Ireland produces and the amazing artisan produce that we have.”