The now-famous 110-90 is like one of those dead poets – reasonably well appreciated when they were alive (or while they were still being built, in tractor terms) but inexplicably lauded now that they’ve passed on.

It’s not hard to fathom why Fiat’s (or Fiatagri’s) 110-90 is so well thought of now; it’s a chunky, no-nonsense looking beast. It makes a great engine noise. It ‘feels’ like it has lashings of power, as it revs up to almost 3,000rpm (albeit downhill) – courtesy of an unwieldy hand throttle perched up on the right-hand ‘console’.

There’s no ISO-Bus screen; there are definitely no memorised engine speed settings. This tractor graduated from the school of springs, cables and levers. The only use for a ‘diagnostic scan tool’ here would be to use as a make-shift hammer, to beat the ‘rubbery’ gearstick out of 5th – where it occasionally might wedge itself. 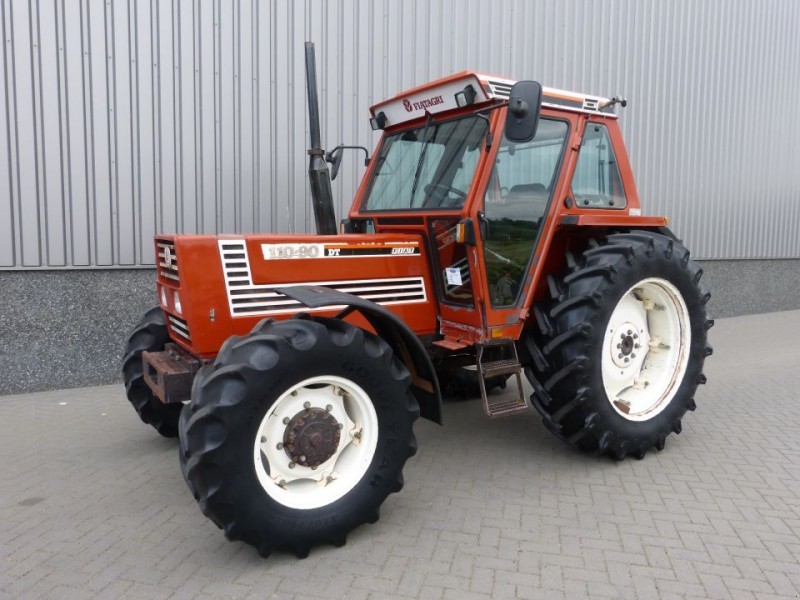 The bad points: For starters, visibility out of the wide, squat cab (if you have the ‘Comfort-Wide’ version, which most did) is akin to peering out of a German U-boat. You sit down low, sandwiched between the mudguards.

Early versions, like the 80 Series models that went before, weren’t galvanised – so they rusted away to nothing after a spell of rain. Aside, some of the earlier Fiats had dodgy ‘diffs’, which had the uncanny ability to weld themselves up solid – apparently at random. Was this the first ‘true’ 100% locking differential?

Despite the deep, purposeful note from the 6-pot motor, torque back-up wasn’t actually all that good – even by the standards of the 80s and 90s.

The test of time

Nevertheless, this tractor has stood the test of time – in so far as it was manufactured (largely unchanged in any substantial way) for an enviably long production run, reaching across three decades (from the mid-1980s right up into the 2000s).

Used but sharp 110-90DTs (or the 2-wheel-drive, non-DT versions) still command strong money here in Ireland, compared to many other tractors of the same power and vintage. It’s not surprising that the Ballymena-based Grassmen team chose a 110-90 as a nostalgic ‘doer-upper’ for their recent charity fund-raising initiative.

Like it or loathe it, hats off to Fiatagri (and latterly New Holland) for producing a tractor that is still highly sought after as an everyday workhorse – long after the last of the species rolled off the line.

The newer F (Winner) Series from the same stable arrived in 1990. It overlapped with the aforementioned 90 Series models; sharing forecourts with its older siblings.

Though it might raise a chuckle to say it now, the Pininfarina-designed F Series looked quite sleek and futuristic at its launch. The big glazed doors and wrap-around, rear three-quarter glass were positively striking.

The F Series came on the scene around the same time as Case IH’s chunky-looking 5100 Series Maxxum; the latter having a very ‘modern’ power-shuttle and 4-speed powershift. Soon after came Deere’s full-frame 6000 Series and Ford’s all-new 40 Series; competition was mounting up.

Alas, within a few years, the gearbox (with only a mechanical shuttle) looked decidedly basic and dated. Perhaps that’s no bad thing in hindsight, considering the workshop woes that some ‘fancier’ transmissions were suffering.

The F Series (probably best known here in Ireland in the guise of the original F100 – with its black-coloured front cab pillars – or, in later years, the range-topping F140) struggled to find ‘acceptance’ in many regions.

I remember contractors discussing the merits of these tractors as a ‘second-hand buy’ many moons ago, saying: “I might chance it, but avoid an electronic one like the plague’ – presumably a reference to the Bosch electric lift controls (which were actually quite user-friendly and reliable, as it turned out).

While not universally loved, the F (Winner) Series’ transaxle did figure in the development of the later New Holland M/60 Series (Dual Command and Shuttle Command versions). Ironically, the M/60 Series (which arrived in 1997) and the later TM line-up did amass a very big following throughout Ireland – even beyond folks who previously had ‘blue’ or ‘terracotta’ blood in their veins.

There is still a good scattering of F Series – and a greater number of 90 Series – tractors around the highways and byways of Ireland. Most are still gainfully employed, toiling away on stock farms or contracting fleets. Certainly in the case of the terracotta or later blue/black 110-90s, their owners would be sad to see the last plume of black smoke (or ‘reek’ if you prefer) rise from the exhaust.