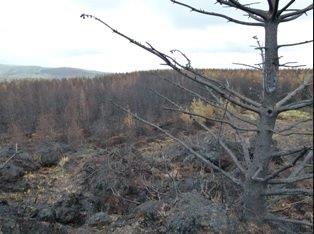 It says there is a heightened risk of gorse, forest and bog fires with the current weather conditions.

The fire service says that Clare firefighters responded to one of the largest wildfires of the year to date recently when two square kilometres of bog and gorse were scorched on Ben Dash, located between Lissycasey and Kilmaley.

It says that brigades were in attendance for nearly 11 hours at fires in the area.

It says that with forecasts suggesting a return to drier conditions early next week following some light rain this weekend, the risk posed by uncontrolled burning remains high.

Denis O’Connell, Senior Assistant Chief Fire Officer, said that there has been significant damage to forestry and land as a result of the recent fire. He also asked that people are vigilant and that they call the fire brigade if they see any uncontrolled fire.

“The highest risk period for quickly spreading fires occurs between March and June, when ground vegetation is dead and dry following the winter period. Fires have spread quickly this week due to the dry vegetation, low humidity and easterly winds which feed the fires.”

It is an offence under the Wildlife Act to burn growing vegetation between March 1 and August 31 in any year, on any land not then cultivated.

Clare Fire Service is advising landowner of the following: