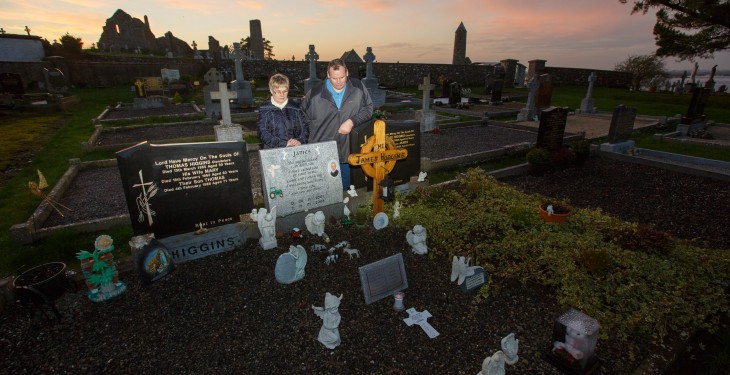 The heartbroken father of an ‘extraordinary little fellow’ who died in a farm death on his farm has told of how Christmas will never be the same without his six year-old son.

Little James Higgins died on January 19, 2008, when he fell into a soak-pit on the family farm near Shannonbridge, Co. Offaly.

Now, almost seven years later, his father Padraig has urged fellow farmers to learn from his family’s tragic story with a simple message – ‘a farmyard is not a playground’.

The part-time farmer and Bord na Mona employee, his wife and James’ three brothers, Colm, Anthony and Darrell, have decided to bear all in a heartrending video to raise awareness about the grave safety risks on farms in what has been an horrific year for farm deaths, with 27 already recorded this year – 12 more than in 2013.

The video is the second in the ‘What’s Left Behind’ series produced by Embrace FARM, an organisation established by Co. Laois farmer Brian Rohan following the death two years ago of his father Liam to provide support to families bereaved by farm accidents. The ‘What’s Left Behind’ campaign is a case of bereaved families setting aside their anguish to tell their harrowing stories in the hope it might help halt tragedy on Irish farms.

In addition to Padraig’s harrowing account, his son Colm (29) tells of the horrific moment he lifted his younger brother out from the freezing cold January water after he and his father had returned from an outside farm and discovered little James’ woollen hat floating in the water.

“Christmas will never be the same. Santy was in the house up to that year,” the teary-eyed farmer tells.

“Santy hasn’t come for James since. There’s a space at the table. There’s always a candle lit at the table for Christmas, where James would be sitting. We will never be the same. We will never have that family photograph at weddings or whatever. Christmas can be a hard time, particularly when it’s a child that we lost who would have enjoyed Christmas so much. When you go shopping and see Santy and the children all jumping around, you’d feel it.”

Fondly recalling his son’s precocious ways, Padraig said James was an extraordinary little fellow. “He would stand out anywhere with the blonde hair. He had a great ability to mix with people. He could talk to own pals and his own age. He could relate to people in their 90s the same. He was a lovely friendly little fellow, as all little children are, but he was exceptional.”

Looking back on the fateful day, he said, that day in January is a day that we will never forget. “That day he had to collect his glasses and went down to his grandfather to show them. His grandfather was only about 50m away from the house and it was a regular occurrence for him to go down to see him. He didn’t make it that day. When Joan (James’ mother) went down he hadn’t been there.

“She had been searching around and there was no sign of him. There was a hole dug in the garden for a soak pit and there was some water in it and we saw the little green knitted cap that he would have been wearing normally and it was floating around on the top of it. We thought there was something strange here.”

A short ladder was fetched and James’ brother Colm climbed down into the soak-pit and bore the freezing cold water as he searched for the little boy.

“I’d say I had to go up and down three or four times ‘cause the water was that cold,” Colm recalled.

“I was fully convinced he wasn’t in it and said I would go down just one more turn to be certain. Whatever way my hand just turned, I caught his jumper and brought him up. The panic started then.

“The ambulance arrived out and they brought James off and we knew in our heart….we couldn’t see anyway out for James.

“We knew going in there was no hope. We arrived into the hospital. They had him laid out in a bed. Lovely flowers. Toys, shapes of toys. Blankets and quilts and that. He was just lying there.”

Padraig admits now that the freedom his sons had growing up can no longer be afforded to children on farms, not least given the mechanization of farms today.

“It’s an awful year for farm accidents and there’s no one cause. You may be vigilant all times now on the farm.

“All our little lads used to come out and feed calves and it was great but we didn’t see the danger. An accident happens in a split second and it’s too late then. People have to be aware of what’s left behind. A farmyard is not a playground,” he added.

Praising the Higgins family for their efforts, Embrace FARM founder Brian Rohan said they had made a remarkable gesture to try and enhance awareness of the risks on farms.

“For the Higgins family to come out and tell their tragic story in this way is an incredible testament to their generosity of spirit. By giving their story they are shedding light on a very dangerous environment for young and old. We just hope now that their story will help others avoid the awful tragedy that has befallen so many this year and every year on Irish farms. We are asking that people share this as much as possible so we can heighten awareness of the risks on farms and perhaps help save lives in the process.

“This entire campaign would not be possible either without the support of ABP. They came to us in the summer and wanted to get involved in supporting what we do in some way and when we came up with this idea they ran with it and have been hugely supportive all the way. We just hope it can make a difference and in doing so are honouring those who died on farms.”