Farmers, an agricultural contractor and a veterinary surgeon have all featured on a list of tax defaulters for the first quarter of 2017. The list was released this afternoon by the Revenue.

A total of 18 farmers and one veterinary surgeon were fined for failing to lodge Income Tax returns to Revenue in the first quarter of the year. 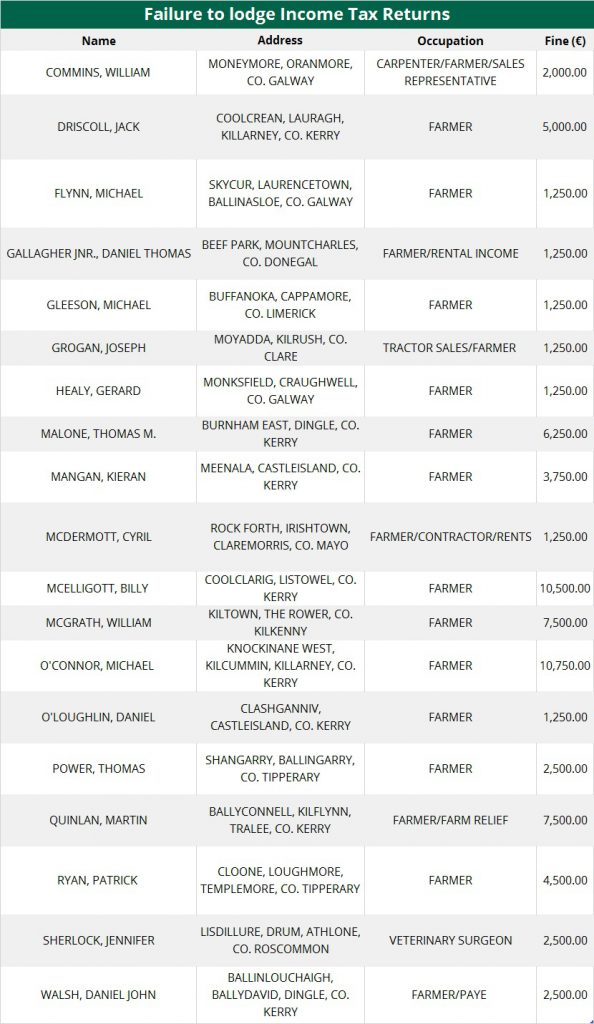 Meanwhile, Michael Kelly – an agricultural contractor – from Garryarthur, Kilfinane in Co. Limerick was fined €2,500 for failing to lodge VAT returns.

A farmer – named Peter Mackle – from Killyneil, Silverstream, Tyholland in Co. Monaghan was also sentenced to 21 months imprisonment for an oil laundering offence.

A total of three farmers made the tax defaulters list for the misuse of marked mineral oil (green diesel). These farmers were all fined €2,500.

The second part of the tax defaulters list also includes persons in the case of whom a penalty was determined by a court during the period January 1, 2017, to March 31, 2017.

Settlements are published when the extensive voluntary disclosure options are not availed of and the default arises as a result of careless or deliberate behaviour, according to Revenue.

A total 86 cases were published today in the second part of the tax defaulters list, with the settlement amounts from these cases equalling €14.4 million.

Two farmers were involved in such cases, with their fines exceeding €120,000.

Pj Davis – a farmer from Kilberry, Athy in Co. Kildare – was ordered to pay Revenue €40,100 following a revenue audit due to the undeclaration of VAT.

Meanwhile, a farmer and turf supplier in Co. Laois was fined €81,939.53. Brendan Scully Jnr. from Coolagh, Clonaslee was also fined following a revenue audit due to the undeclaration of VAT.