Ahead of this weekend’s All-Ireland football semi-final clash between Tipperary and Mayo, one farmer in the premier county has taken to the field with a disc harrow to wish the footballers the best of luck.

The farmer, who wishes to remain nameless, took to the field yesterday morning and spent a few hours carving out a message to the team and Tipperary footballer George Hannigan, who is a member of the local club Shannon Rovers.

The photo above was sent into us by Martin Toohey, who is from the area and owns a drone.

“The corn was cut so he carved the letters [of the message] into the field to give the team some local support from Shannon Rovers GAA. It’s a tight-knit community,” Toohey said.

‘Best of luck to George and [the] Tipp footballers’ was the message carved into the stubble of the field, from which corn was cut from earlier this month.

The message is carved in a field on the side of a hill and it can be seen by passers by from the road in Coolbawn.

Former Tipperary goalkeeper Paul Fitzgerald has tweeted the image, saying that “they are definitely gone football mad in north Tipp”. 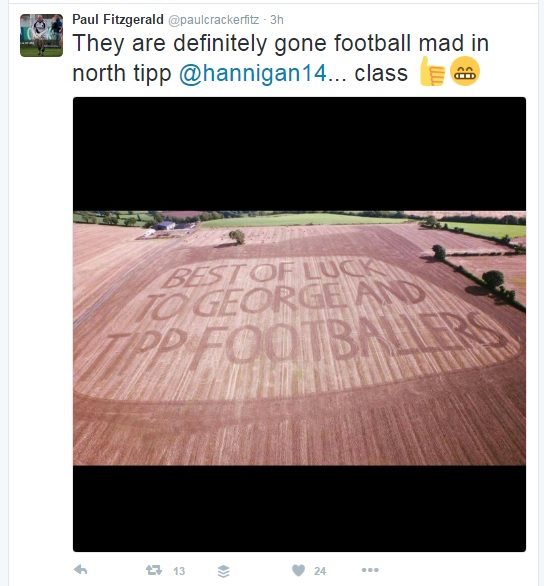