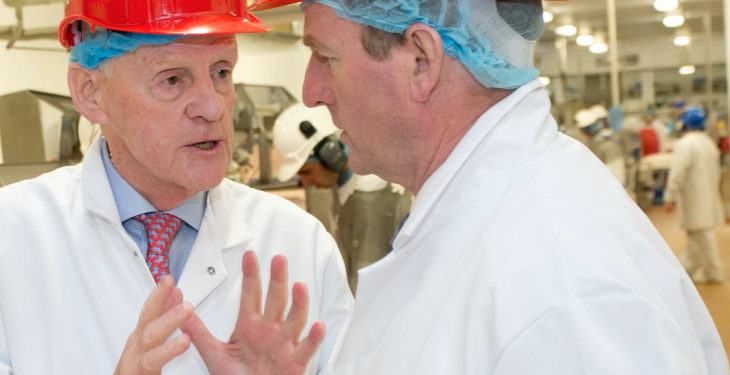 The move by ABP to stop the blanket collection of a levies for farm organisations has been driven by farmer requests the meat processor has said.

In a statement issued tonight, the Larry Goodman-owned ABP has said: “Based on farmer requests over the past several months regarding the collection of the EIF levy, ABP had decided not to make EIF levy deductions unless requested by the farmer to do so.”

It is understood that from August 29 ABP will stop collecting the levy from farmers at all its plants, unless explicitly told in writing, by the return of a form it is sending to all suppliers, to continue its collection.

Meanwhile, ABP has said that it is “disingenuous” of IFA to link its decision around levy collection with its planned Slaney deal.

Earlier today IFA President Joe Healy said when he met the Managing Director of ABP Ireland, Finbarr McDonnell, and the Group Chief Executive, Frank Stephenson, this week, the only issues ABP raised with the IFA delegation were the Association’s concerns about the Slaney deal on competition grounds and their collection of the IFA levy.

The IFA statement went on to say that in recent weeks, IFA submitted a report carried out by a leading competition economist  to DG Competition in Brussels which concludes that the ABP proposed deal with Slaney ‘is likely to weaken competition even further’ in the purchase of cattle in a market already characterised by weak competition.

However, it declined to comment further on the contents of the report.

It is estimated that the levy collection across all income sectors is worth €4.7m to IFA every year, which it describes as ‘voluntary’.

ABP processes 22pc of the beef kill and this is set to increase to 28% should a proposed deal to take over Slaney get approval from the Competition Authority.

IFA is the main recipient of the controversial European Involvement Fund (EIF) levy, which is collected by meat factories from farmers.

In its most details accounts, for 2014, the IFA said levies accounted for approximately one third of its €12.9m income.

In June this year IFA announced that it would continue to collect levies from farmers, stating that joint membership and levy system is the fairest and most appropriate mechanism for funding the Association and maintaining services to farmers.

It said the current system of funding allows farmers to contribute, proportionately and fairly, based on the size of their farm and value of their output.