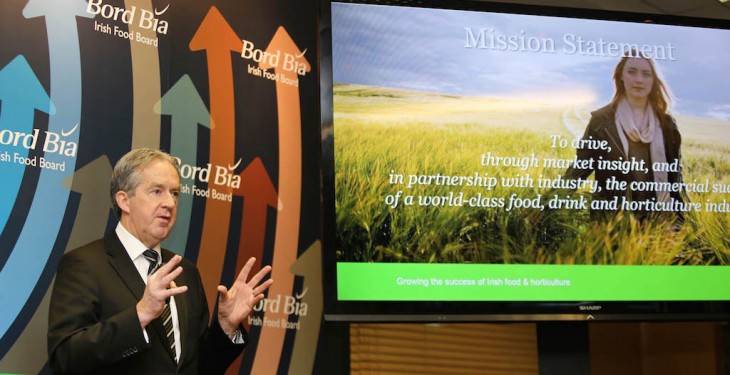 The Department of Agriculture has pencilled in a significant staff and funding boost for Bord Bia this year.

The State’s food marketing arm look set to see its level of grant aid from the state grow by over €2m to €32.5m this year, according to an estimate from the Department.

Bord Bia also receives income from a statutory levy under the An Bord Bia Act, 1994, provides for payment to the Board of a levy per head on slaughtered or exported livestock. Under section 37 of the Act, the rates were set at €1.90 per head for cattle, 25c per head for sheep and 35c per head for pigs.

According to latest figures, the levy nets over €5.7m for board each year. The latest figures reported by Bord Bia in 2014 showed a total income of in excess of €50m.

It recently published its new Statement of Strategy, 2016 – 2018, “Making a World of Difference”.

The document sets out the key forces driving change in the marketplace and the strategic pillars that will guide the agency’s activities in the period ahead. It includes a renewed focus on routes to market and the importance of building its international market presence.

Bord Bia emphasised the importance of innovation, consumer insight and the need to add value.

Bord Bia has also announced the establishment of a new Insight Centre which will become operational in 2016. ‘The Thinking House’ will be located at the organisation’s Dublin offices and is designed to help companies successfully underpin new marketing and brand initiatives by ensuring the consumer is at the heart of everything they do.

Bord Bia is also on the look out for a new Chief Executive with Aidan Cotter set to retire early next year.

Aidan Cotter was appointed Chief Executive of the food marketing board in July 2004.

Cotter previously served in Bord Bia as Director of Operations for a number of years, and earlier gained extensive experience in the marketplace as the organisation’s European Director, based in its London office, and prior to that in Dusseldorf.