‘Farmer-processor contracts are needed to cope with volatility’ 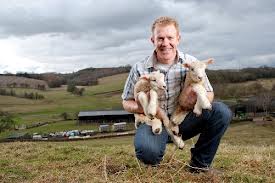 BBC Countryfile presenter Adam Henson believes that the establishment of contracts involving farmers, processors and input suppliers can provide primary producers with the security they need to put their businesses on a long-term, viable footing.

“This is one way of allowing production agriculture to cope with the challenge of volatility,” he said.

Henson visited the recent SIMA agricultural show in Paris, where he spoke to Agriland.ie about the need for new technologies on farms.

“I also believe that farmers must invest in new technology in order to drive efficiency. In our own case we have joined forces with a neighbouring farmer, which has allowed us to effectively double our tillage acreage.

“In tandem with this, we have committed to make more and effective use of precision farming techniques, including the use of variable rate seeding and fertiliser application systems.

“And it has worked. Over the past three years we have managed to drive down our cost of production by 10%.”

Henson manages a 1,600 acre tenanted farm in the Cotswolds region of England. The tillage enterprise is centred on the growing of winter wheat, winter barley, spring barley and oilseed rape. He also has an expansive livestock enterprise, which includes flocks of rare breed sheep. These are the focus of his Cotswold Farm Park, which attracts 100,000 visitors annually.

“We use electronic identification as our core management tool for the sheep flocks,” he said.

“It is such a flexible and effective way of storing performance related information on all our ewes and lambs.  I cringe when I think back to the days when we ran around with sheets of paper trying to monitor flock performance manually.

“There are many ways in which the new, smart technologies can help farmers improve the performance of their businesses. And I would encourage farmers in Ireland to actively embrace them.”

Henson said that the Countryfile has no plans to come to Ireland at the present time, but if presented with good ideas that could change.

“We are always working about three weeks ahead of our broadcasting date. So if anyone in Ireland has an idea that would make a good feature for the programme we would be more than happy to come over and film it.”