Falling lamb supplies, coupled with increased demand at the ringside, has seen factory buyers become more vigorous when it comes to the hunt for lambs.

Lamb throughput has declined in recent weeks. This was particularly the case during the week ending October 22, when numbers dropped by almost 20% or 8,986 head.

The fall in lamb supplies in recent weeks is mainly due to strong throughputs since the Muslim festival of Eid, which occurred in late August / early September.

Since then, lamb supplies have remained strong and failed to drop below the 49,000 head mark until the week ending October 22. 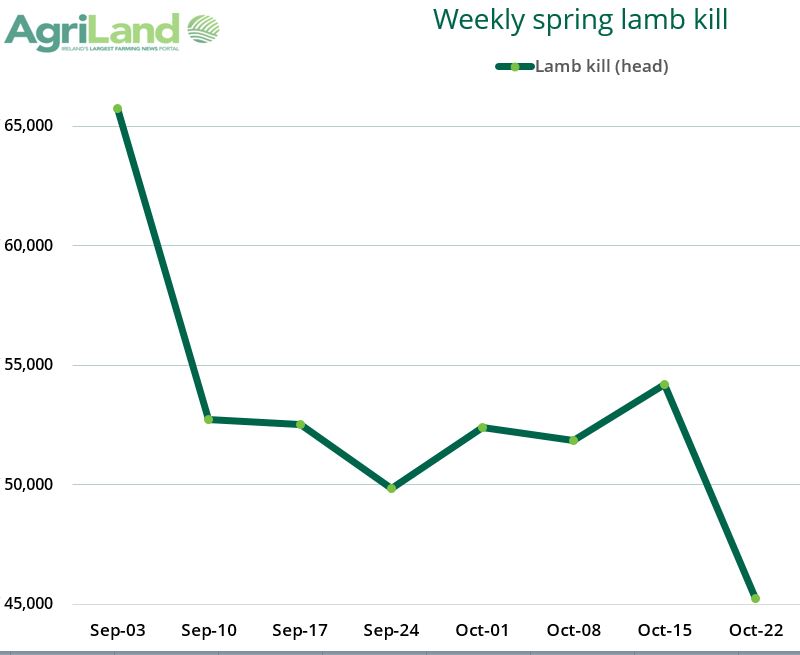 In addition, the cumulative sheep kill for 2017 is also running ahead of 2016 levels. So far this year, almost 1.17 million lambs have been processing in Department of Agriculture approved sheepmeat export plants – a climb of 40,963 head or 4% on 2016.

What are factories offering?

Given the significant tightening in supplies in recent weeks, factory buyers are using a two-pronged approach to secure supplies.

Many buyers have taken up residence at the ringside; others are busy contacting finishers with large numbers in order to ensure a constant kill.

Some buyers have also opted to offer another 5c/kg to the base price; a step taken by both Irish Country Meats and Kepak Athleague.

In some instances, farmers have received prices of 480c/kg. In addition, many are holding out for at least 475c/kg before even contemplating off-loading their lambs.

Despite the increased demand for lambs, ewe prices remain relatively unchanged and most plants are offering 240c/kg to secure adequately-fleshed animals.

Buoyed by higher factory prices, many mart managers have noted that the trade has improved significantly at the ringside in recent days.

In most cases, finished lamb prices have improved by €2-5/head. This trend has also filtered down to the store market, with prices improving by 20-25c/kg in certain venues.

He said: “There were very few factory-fit lambs on offer and the store trade was dominated by lambs of poorer quality.

The number of quality store lambs on offer has reduced over recent weeks and more and more light lambs are now coming on the market.

After a slow September and October, store lamb numbers are beginning to creep up in Cahir Mart, the mart manager, Jonathan O’Sullivan, told AgriLand.

He noted: “Nice store lambs are starting to creep up in price, as numbers are scarce on the ground. Generally speaking, lambs weighing 35kg traded at €78-80. Similar type lambs sold for €2.00/kg one month ago.

“There were less farmers to buy store lambs this year; those that are buying are leaving it later in the year to purchase.

“Factory prices have been difficult in recent years; it’s the farmers that left it later to purchase stores who made the most money last year. More buyers are expected to come out in the coming weeks,” he added.

Moving to fat lambs, O’Sullivan said: “Fat lambs are scare, as we are entering the ‘in-between’ period of the year.

Touching on cast ewe returns, he said: “Ewes have yet to break the €100/head barrier; most factory-fit ewes are selling for €96-97.”

Ballinasloe Mart held its weekly sheep sale on Thursday last. According to the mart’s Eoin Kenny, there was a good overall trade and heavy lamb prices posted some improvement.

“Over recent weeks, lower factory prices put the lamb trade in a difficult position. However, most lambs weighing 45kg sold for €95-100 last week. That’s an improvement of €2-5/head compared to the previous week.

Moving on to the ewe section on the sale, Kenny admitted that he thought a smaller number of ewes would have been marketed last week.

However, he added, there were plenty of breeding ewes on offer. The best of the hoggets traded to a top price of €147, prices of €130/head were achieved for first-crop ewes and second and third-parity lots made €110-120/head – an improvement of €5/head on the sales of recent weeks.