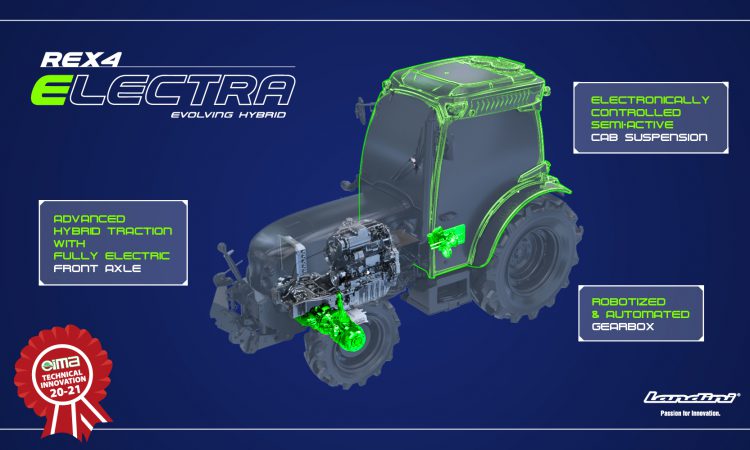 The Argo Tractors group – owner of the Landini and McCormick brands – took the award for its Electra – Evolving Hybrid system, also intended for the Landini REX4.

This, the group says, will take centre stage both at Eima Digital, the preview scheduled on a web platform from November 11 to 15, and at the physical edition of Eima 2021, scheduled from February 3 to 7, at the Bologna Fiere fair district.

In the project Argo Tractors developed both the mechanical part and the electrical components.

The entire system is controlled by the PMS (Power Management System), which supervises the operation of all devices, including the battery and controls motor and generator via their respective inverters.

This, Argo says, made it possible to create a hybrid tractor in which the diesel engine powers the front electric motors through generator and battery, and continuously “talks” with the conventional mechanical rear final drives.

The result is basically a parallel hybrid with a system that is independent of the mechanical ratio between the rear and front wheels of the tractor.

A control unit detects tractor movement and rough ground and regulates damping. Argo describes the system as hybrid, combining a “soft” behaviour to take up vibration and a “stiffer” setup to prevent the cab from hitting the travel stops. This results in a 15% less vibration transmitted to the driver, the group says.

A semi-automatic transmission uses actuators to operate the transmission rods, while a multifunction joystick in the cab replaces the traditional speed lever. The electronic control unit (ECU) receives a change-speed input from the joystick and the data about tractor status from the sensors.

“When the conditions required for changing speed are met, the ECU signals the actuators to move the transmission control to the desired position,” Argo says. This ultimately leads to less mechanical levers in the cab and less noise and pollutants, the Landini owner group says. 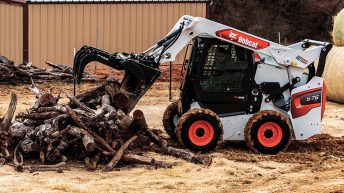