Europe cannot be shaped or sacrificed by the actions of a ‘go-it-alone’ nation, regardless of how big that nation is, according to Irish MEP and first vice-president of the European Parliament Mairead McGuinness.

McGuinness conveyed this message at a recent regional meeting of the Eisenhower Fellowship of Ireland in Dundalk, Co. Louth.

The Irish MEP believes that there is a danger that Ireland could become fixated on Brexit and island of Ireland issues, while other member states look to focus on a future beyond Brexit in a debate about the future shape of the EU.

“The mood music has changed substantially in the last six months, and it is future orientated. If we neglect to make a strong input into the debate about the future of Europe, we could do so at our peril.

We have to find the political space to keep a sharp eye on all of these issues, being mindful of our specific concerns around Brexit – but also to contribute strongly to the shaping of the future of the EU.

Furthermore, McGuinness explained that there is an evident increase in popular support for the EU in many member states since the Brexit referendum. There is a belief out there that the EU is “worth sticking with, even if it’s in need of reform and renewal”, she added.

Speaking specifically on Brexit, McGuinness outlined that there is strong agreement between the member states that progress must be made on citizens’ rights, the Irish border and the financial settlement before there is any negotiation on a future trading relationship with the UK.

In recent weeks, we have seen an attempt by the UK to move away from the agreed approach to the negotiations, as they try to force a discussion on the future relationship and transition phase.

“This has been rebuffed by the EU and it will be interesting to see how the negotiations proceed next week. The EU is rightly resisting any attempt by the UK to link its financial commitments to a future deal.

“Brexit will impact on every single aspect of the lives of citizens in the UK. Reluctance to publish over 50 reports on the potential impacts is depriving UK citizens of vital information about their future.

“I would urge the British government to publish these reports immediately and facilitate an informed public debate on the best way forward. For its part, the European Parliament has carried out and published a number of studies on the impact of Brexit across the sectors,” she concluded.

Any final deal on Brexit will have to be ratified by the European Parliament. 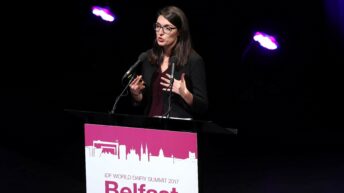