Carrick-on-Suir is all set to cover itself in a mantle of festive sparkle as a parade of tractors illuminated with fairy lights prepares to roll into town. The Christmas Tractors of Carrick-on-Suir will take place on Saturday, December 16, at 5:30pm.

Now in its fourth year, it is a big crowd puller, with 20,000 people on the streets last year, according to Piltown dairy farmer, Stuart Downie, who came up with the idea for the get-together.

“A friend had been to see the Coca Cola truck and was disappointed with it. She said she would rather look at tractors on the streets of Carrick, so I took a mad notion to line up illuminated tractors for Christmas,” Downie explained.

I rang a few of the lads and the next thing there were 10 tractors ready to go and 5,000 people attending.

The gathering quickly grew, with 18 tractors and a lorry taking part the following year. The Grassmen from Ballymena, an enterprise that specialises in agricultural DVDs, attended to take part in the festive fun.

“We broke the record for the most illuminated convoy, which had stood at 32,000 illuminations on the Coca Cola truck, reaching 39,500,” said Downie. 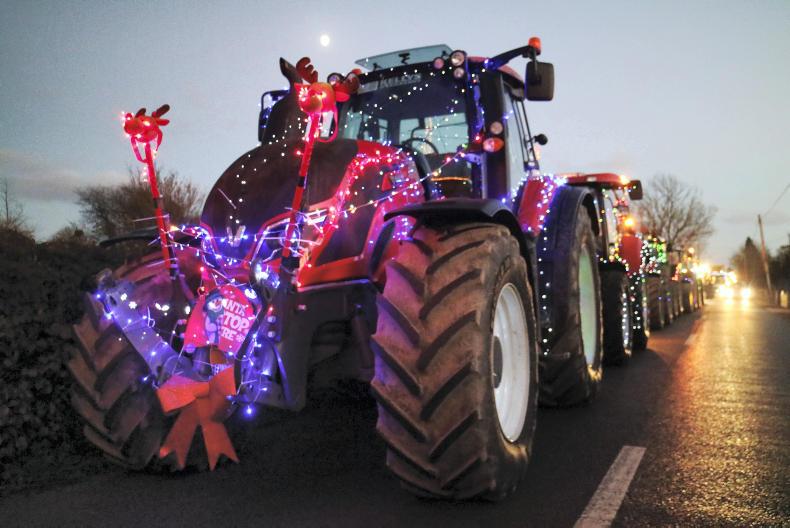 The second year also saw the group invited to close the Winterval festival in Waterford.

“Last year, we had: 23 tractors; a loader; a silage harvester; and a lorry. Children’s entertainment in the car park is also part of the event. We built a custom sleigh and Santa used it to travel to his grotto in town.”

This year the Grassmen will be back, with: approximately 25 tractors; a lorry; and a silage harvester lined up to participate, according to Downie – who formed the Crop Cruisers, which makes agricultural DVDs out of the event. This business now organises the annual gathering.

This year’s event will incorporate a bigger carnival, and a children’s pedal tractor parade – which will lead the main entourage into the car park.

Among those taking part will be local woman Leonie Skehan who rocked last year’s gathering in a 7718 Massey Ferguson before taking part in the Grass Gals silage fundraiser in Mount Melleary.

Shauna Hill of the Crop Cruisers will wow the crowds in her sponsored John Deere 6215R that she will be only too happy to rev out. Other models on show will include the New Holland T7.315; the Deutz Warrior; Fendt; and the new Case Optum.

The gathering has accepted donations for various charities over the years, including the local river rescue group and Embrace FARM. This year donations will be accepted for Cork’s brain tumour support group and the Make A Wish Foundation.

People come from all over the country to the event, with a mix of urban and rural people. Everyone loves tractors, and tractors with Christmas lights are something a bit different.

It takes approximately six hours to ‘dress’ the tractors and wire them up. The event will conclude at approximately 8:00pm. For more information check out the event’s Facebook page and that of the Crop Cruisers.