EU wholesale dairy markets continue to fall in May

EU wholesale markets for dairy products fell again in May as pressure from supply remains, according to Dairyco.

Prices across most commodity products have seen week-on-week reductions, with only cheddar seeing some resistance, it says.

Buyers are currently presented with some of the lowest prices seen for a number of years but are largely reserved about committing to a market under such supply pressure, Dairyco says.

Commentary suggests that milk production in the EU performed strongly through the peak, however now should be on the seasonal decline, it says.

Dairyco says that this may help alleviate some of this pressure over the coming months, however, if global production continues around or above last years’ levels then this relief may be limited. 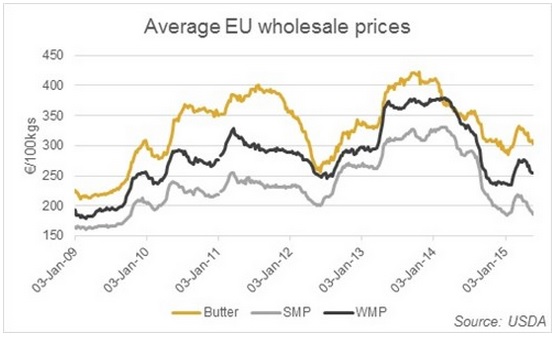 EU butter and SMP prices continued to fall in May, continuing the trend from April.

A weaker New Zealand dollar is also impacting on the competitiveness of EU dairy product on export markets, it says.

The latest Global Dairy Trade auction has fallen for the sixth consecutive time, down 4.3%.

Comparing the April 2015 milk produce figures with those for April 2014 also shows that total milk sold for human consumption decreased by 1.9% to 36.2m litres.