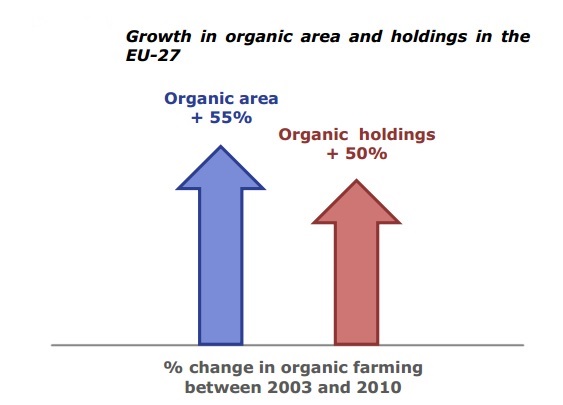 In the last decade, both the number of organic farms and the area dedicated to organic farming have grown by 50% or more.

Organic area in the EU increased by about 500 000 hectares per year. As a result there are more than 186 000 organic farms across Europe, cultivating an area of 9.6 million hectares according to the latest Brief on organic farming published this week by the European Commission.

Organic production patterns vary between EU Member States. However, across the EU, permanent pasture accounts for the biggest share of the organic area (about 45%) followed by cereals (around 15%) and permanent crops (about 13%).

In the context of the sector’s considerable and rapid growth, the Commission has proposed new updated and adjusted rules for the sector which are currently discussed with the European Parliament and the Council. The proposed new rules seek to improve the current system, so that the sector can grow in a sustainable way and respond to future challenges while keeping its long-term relationships with consumer

New consumer research launched by Bord Bia today has highlighted a return to growth in the retail value of organic food in Ireland for the first time since 2010.

The Bord Bia study, funded by the Department Agriculture, Food and the Marine, values annual retail sales of organic food at €99.1 million, up from €97 million last year, with almost 60% of consumers surveyed purchasing organic produce in the last six months.