In a recent update from Bord Bia Eoin Kelly, Business Analyst, with the organisation outlined the results of the latest European beef forecasting group which indicate that beef output will recover this year, with consumption levels also expected to increase on 2013 levels.

Kelly stated: “Beef output in the EU-15 fell by over 4 per cent to 6.6 million tonnes in 2013, driven by declines in countries such as Italy, Germany, France and the UK. These declines are set to be reversed this year with a recovery in supply forecast for the EU-15, bringing output back toward the levels seen in 2012.”

He said: “This increase is expected to be aided by a 6 per cent rise in Irish output, while further recovery in production is also expected in Belgium and the Netherlands, where a rise of over 8 per cent is forecast for both countries.”

Outside of the EU-15, production continues to be down, with Poland down over 5 per cent last year, and this trend is expected to continue in 2015 with a further decline forecast. Looking towards 2015, preliminary forecasts show beef output in the EU is expected to stabilise, he remarked

According to Kelly the data shows consumption levels within the EU fell by over 2 per cent last year, but this trend is set to be reversed in 2014 with growth of 1 per cent anticipated to 7.2 million tonnes. A further increase in consumption is expected for 2015.

Kelly commented: “The EU continues to be a net exporter of beef. However, exports in 2013 were down by 11% on 2012 figures. This decline is largely driven by a 28 per cent and 94 per cent reduction in exports to Russia and Turkey, respectively. Despite lower exports, increased trade was recorded to African countries such as Algeria and Asian markets such as Hong Kong.

Kelly concluded: “The majority of beef imports into the EU continue to come from South America, USA and Oceania. Imports into the EU in 2013 were up by over 8 per cent on 2012 figures, driven largely by a 15 per cent and 32 per cent increase in imports from Brazil and Australia, respectively”

Click on image below to see EU balance of Trade: 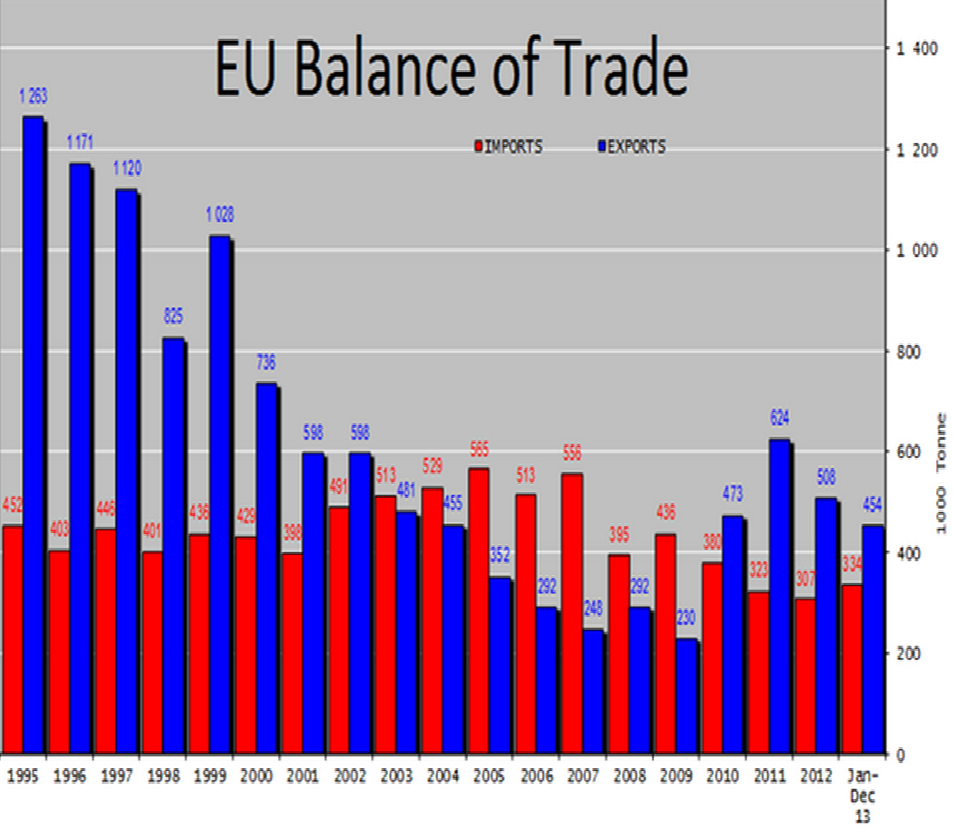